After the events of the previous session, the players had access to a database of navigational information, which gave them an advantage over the other Rogue Traders, who would be navigating blind. After some poring over the starmaps, and a brief discussion on whether they should try to follow the Trader they suspected of attempting to assassinate their lord, they decided to head to Ansobe in a two leg journey, stopping off for a quick look at Bedaho on the way.

Last week, I gave them a map of the local systems and astronomical phenomena; the amount of useful material on the map depended on how well they did in repairing the data console they discovered, and they did very well so got pretty much everything. I think the players enjoyed the experience of looking over the map and deciding where to go, which is exactly the kind of sandbox-style play I am aiming for with the campaign design. I have mapped out the sector and at each point of interest I've got a brief summary of what can be found there; I've not gone into too much detail, as I've discovered that I'm quite comfortable with improvising, and I find that a few starting ideas give me enough to work with, while too much detail is a waste, as I end up forgetting bits, even if I wrote it myself. I'm always a bit concerned that players might be annoyed to discover that they're playing something that's being made up on the spot, but I think this is a decent balance.

On the way, some of the crew reported a ghostly presence in the forward decks, so the team went to investigate, discovering that a massive amount of damage had occurred to the ship, with torn bulkheads aplenty, and the front of the vessel open to space. They also ran into an apparition bearing an uncanny resemblance to the ten-year-old son of their Rogue Trader, only grown up and in his twenties. This encounter turned out to be spooky but harmless, with the damage to the ship proving to be part of the illusion, and the party spent the rest of the trip pondering its meaning. Upon arrival in the Bedaho system, they detected an Imperial beacon on a jungle planet which had been marked as a death world on their map. There was a bit of argument over whether to investigate the dangerous planet, but after the ship's psyker picked up a large and intelligent psychic presence on the surface, they decided to leave it for later and move on to Ansobe.

There they discovered Ansobe Secundus to be an arid world with a single settlement of just over 100,000 inhabitants, apparently at an industrial level of technology and with a surprising level of fecundity in the surrounding farmland, given the environment. 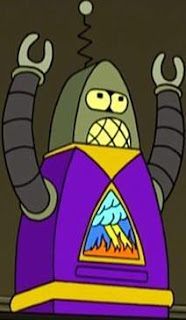 Descending to the planet in shuttlecraft, they were met by six cloaked figures riding motorbikes (it is Warhammer 40,000 after all) who introduced themselves as the priesthood of the planet and asked the players to leave. There then followed a very odd negotiation in which the players seemed to be pulling in two different directions, and which ended, of course, in a firefight. The priests turned out to be robots (it is Warhammer 40,000 after all), which I don't think are in the current 40K game, but used to be back when I first started, so I decided that they themselves were ancient and valuable artefacts, worth quite a lot if retrieved whole. This of course had the players worried about damaging their opponents. As it happened, the weaponry they had wasn't quite powerful enough to do much more than scratch the robots (that said, I think I may have been applying the armour penetration rules incorrectly) but they used some clever stunts to deal with most of the priests, although one escaped to the city.

I'm not a big fan of using miniatures in roleplaying games, and we managed to get through the combat without them, but it did feel a bit loose and ragged around the edges, especially with missile weapons and vehicles thrown into the mix. As such, I think I'm going to give the battlemat a go next time we play, just to see how it plays, and then as a group we can make a decision on which method we prefer. I have already decided to use miniatures for space combat, as the Rogue Trader system is focussed on movement and positioning, and I think it will help to have that visualised at the table, rather than in our heads.

In the aftermath, they kidnapped a local farmer and took him back to the Banshee for interrogation, which proved easy as he was terrified by the very idea of being in space. They discovered that the city was built around a large central temple, and that the head priest Clarius was rarely seen. They then attempted to contact Clarius himself, guessing that if he had robots working for him he must have a working radio, and managed to arrange a meeting the next day at the temple, although Clarius insisted that this time, the players come alone.

And that's where we left it. Next week, we'll play the meeting with Saint Clarius, and find out his connection to the robot priesthood.

PDF
Posted by thekelvingreen at 19:03