This is my contribution to Zak's Secret Arneson Gift Exchange. If you want to see what it's all about, click on the link, but essentially it's celebrating the lives of the creators of Dungeons & Dragons by creating something new for the game.

-----
Aeons ago, when the continents had different shapes and long before mankind climbed down from the trees, the land was ruled by a proud and mighty reptilian empire, of which the lizardfolk of today are but the atavistic descendants. Their religion taught of a glorious afterlife, in which the dead would live again, and in the case of the nobility, complete with all their possessions, including their slaves.

This was a lie. The dead found a vast, featureless grey wasteland, where everyone was on an equal footing, and the riches gathered in their material lives would have been of no use, even if they had transferred over as expected.

One priest-lord decided to escape, and turning all its mystical learning to the problem, found a way back to the material plane, only to discover that millennia had passed, its beloved serpent empire had long passed into ruin, and its body had become a dry, withered mummy. Further long stretches of time passed, the priest-lord trapped in its old body, itself trapped in its tomb, surrounded by useless treasures.

But then the humans, inquisitive as ever, broke into its tomb and began looting the priest-lord's belongings. One of them opened its sarcophagus and reached in to pilfer its burial jewellery, brushing against the mummy's arid flesh, and the ancient creature sensed an opening, a connection. 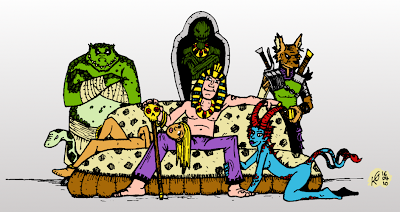 The Undying Sorcerer is the soul of an ancient magician occupying the physical form of some humanoid being. It has spent untold millennia trapped in a sterile afterlife and having returned to the material plane, wants nothing more than to enjoy life in the most hedonistic way possible. Having awoken in a tomb surrounded by wealth appropriate to a member of the nobility, it has found that it has lots of money to spend on the most exquisite depravities, and that modern human society is only too keen to participate; the Sorcerer is most often found not in some dusty tomb, but in high society, throwing decadent parties for the aristocracy.

Having seen, and performed, all kinds of horrors in its time, and having been trapped in a hell without sensation, life and colour, the Undying Sorcerer fears nothing but a return to that joyless afterlife, and will fight with ferocity to prevent such a fate.

(Game statistics are in Labyrinth Lord format, but should be easy enough to convert to other fantasy games of Arneson/Gygax descent.)

The Undying Sorcerer is usually equipped with the best armour and weaponry money can buy, but will try to avoid direct combat. It will be accompanied by 2d4 humanoid or trained animal bodyguards, each of at least 2HD, and 2d12 concubines, around half of which will be humanoid. Once per day, the Sorcerer can also summon up to two animal-headed demons (treat as gargoyles) to fight on its behalf; these return to their home plane by the following sunrise or sunset, or if killed. The Undying Sorcerer avoids lizardfolk, as it is disgusted by their decline.

The Undying Sorcerer casts spells as a fifteenth-level cleric. If druid spells are available, then the Sorcerer also has access to these, at the same level of ability.

As a form of undead, the Undying Sorcerer is immune to Charm, Feeblemind, Hold, Polymorph, Sleep, and Death spells (such as Power Word: Kill or Ray of Death). These immunities are mystical in nature, and apply to both its original and host bodies. It can be turned; a success forces its soul back into the original, mummified body.

The Undying Sorcerer's most potent ability is that of transferring its soul to a new body. It can transfer at will, and over any distance, to its original body, or to a nearby mindless vessel, such as a golem, but otherwise must touch or be touched by its target, then the target must make a save versus spells in order to resist the transfer. A living victim's soul may be simply overpowered, or it may be forced out of the body to another location, at the GM's discretion. The Undying Sorcerer has access to all innate abilities of its host body, but not spells or other learned abilities.

If the host body is killed or destroyed, the Undying Sorcerer will attempt to transfer to its killer, or a nearby vessel, but if not will return to its original body. Should this original body be destroyed, then the creature is flung back to the afterlife, even if occupying a different body at the time. The mummy is guarded at all times to prevent such a fate, and the Sorcerer keeps prisoners at close hand for a quick transfer if forced back.

-----
My brief for this was "A monster midway between a vampire and a lich in power. It should have spellcasting powers and other abilities that would place it at the peak of Expert-level challenge (14th level). An Egyptian theme is a plus."

I'm not that familiar with the mechanics of D&D, so I decided instead to focus on the fluff side of things and make the monster interesting and different enough that the rules didn't matter. I had a look at a lich and a vampire and went for something that was roughly between the two. Then I got to working on the fluff, which was much more fun. The Egyptian theme was easy enough to incorporate, but since it's a fantasy game, I decided to go further back than a mere human civilisation, and a serpent empire seemed suitably pulpy. One thing I noted about the higher-level undead was that they were all bog-standard evil masterminds, and I wanted to do something different there too, so I had a think about what else might motivate the Undying Sorcerer. I liked the idea of a being who had come back from the dead out of a genuine love of life, but to maintain enough of an edge to make it possible for the being to an antagonist, I settled on the idea of the ultimate hedonist, someone who wanted to live life to the fullest, because it had already seen, and rejected, what death had to offer.

PDF
Posted by thekelvingreen at 00:01