Two Jolly Butchers, a Necromancer and a Drunk 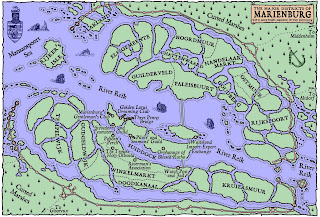 Accompanied by the witch hunter Kurtz and his manservant Percy, Englebert and Harry descended into the tunnels below the city, intent on catching the necromancer Heinz Gerber before he completed whatever task had led him into the damp, dark labyrinth. The Jolly Butchers had Gerber's journal, and a rough map of the tunnels, both of which gave them some confidence; the recognition of Percy's thousand-yard stare and the realisation that Kurtz was blind drunk did not.

Harry was rather in his element underground and his sense of direction helped make sense of the incomplete map, while Englebert's keen eyes kept the party safe from traps; Kurtz and Harry had blundered into a pit trap early on in the expedition, but after that, the burglar took the lead and steered them clear. Soon enough, and with a suspicious lack of interruption from the undead things they knew were lurking all around them, the party reached an open chamber lined with statues. Because this was WFRP and not D&D, the statues did not come to life and attack, and the party passed through to the bronze doors beyond. Intricate carvings -- some form of writing -- covered the doors but none in the party recognised it, although it was clear it was ancient.

Nudging the doors open, the part entered a large mausoleum, at the far end of which stood their quarry, the necromancer Gerber, engaged in some kind of ritual. As Gerber chanted and waved his hands in eldritch patterns over a stone sarcophagus, the party attempted to creep forward, only for the whole plan to be blown by Kurtz bellowing a challenge to the wizard.

It was at this point that the party was ambushed by skeletons. At first Englebert was the only one not frozen by fear, but the group made short work of the undead, only to be assaulted by a second wave almost as soon as they'd put down the first. Meanwhile Kurtz was screaming at the Jolly Butchers, ordering them to take the battle to the wizard; Harry was busy stomping about with reanimated corpses hanging off him, scratching at his armour with all the force and fury of  light drizzle, and Englebert wasn't about to go on a lone charge, so they ignored the witch hunter's ravings.

As it turned out, the fates -- or WFRP's treacherous magic system -- did the party's work for them, as Gerber's ritual backfired and he started to be thrown about by invisible sorcerous energies. Harry and Englebert smashed aside the last of the lesser undead, while Kurtz and Percy reloaded their pistols -- which up until now had been rather useless as anything other than loud and expensive clubs -- and all looked up as Gerber underwent a change, ripping, expanding and twisting into a new form. From the necromancer's desperate cries of anguish, the party guessed that the transformation was not voluntary. 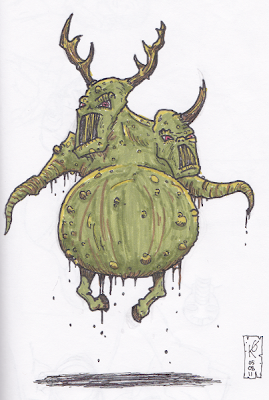 Gerber had become a blasphemous, stinking thing, with multiple heads, sharp horns and a bloated belly, all surrounded by a cloud of buzzing, unnatural and mutated flies. Worst of all, his shape was still in flux and he was floating a few feet off the ground. As the thing bobbed at a leisurely pace through the air towards them, Englebert let off an arrow and retreated back to the tunnels, while Harry sidestepped into a better position and readied his warhammer. Kurtz had by this time reloaded, but Percy fumbled with his shot and powder and would not be ready in time for the creature's assault. It belched and spewed forth a stream of vile, maggot-strewn vomit at the dwarf and the burglar, but missed, the slick yellow filth hissing and bubbling as it slid down the stone wall of the tomb.

With a sound like a crack of thunder, Kurtz fired both of his pistols at the thing, spattering gore and ichor across the entire party -- an Ulric's Fury result caused twenty-two wounds on the second hit, more than making up for the ineffectual shooting earlier on-- but even this did not seem enough to slow the creature, until it started shimmering and flickering, before collapsing into a tiny point of light that disappeared with a pop as whatever sorcery tying it to this plane failed at last.

Kurtz and Percy set about purifying the tomb of Gerber's necromantic influence, and Englebert and Harry set about liberating it of any treasure, finding a bag of ancient gold in the sarcophagus, as well as what they took to be the bones of Bigby; Harry crushed these to bits, just in case. The two Jolly Butchers would have liked to have looted explored further, but ominous howls and scratchings from the tunnels behind them suggested that time was short, so they fled the tomb and returned to the surface.

Now satisfied that the barman Jorn was not also the necromancer Gerber, Kurtz released the Jolly Butchers' employee into their care, and offered to treat them all to a slap up meal; while it was clear that the man was deranged, Harry was not about to pass up a free meal and agreed on everyone's behalf. Soon after, Kurtz and Percy left Marienberg and the Jolly Butchers settled back to discuss their plans to expand their modest holdings, at which point they discovered that one of the old captains of the gang -- from before Englebert's appointment as leader -- had escaped from the prison on Rijker's Isle and was on his way to the Doodkanal.

PDF
Posted by thekelvingreen at 17:18