This post contains spoilers for Tatters of the King. My players shouldn't read on, nor should you if you intend to play this campaign. Right, so I think my players have broken the campaign. To be fair, it's not the most well-designed thing in the world, and regular readers will know that I've been struggling with it since we started. Tatters of the King is not the most egregious railroad I've ever seen in an rpg product, but it's far from flexible in its plotting. The writing assumes that things will happen in a certain order and at certain times, and leaves little room for player agency; it does not seem to have occurred to the writer that most players will not be content to sit on their hands and wait for the next clue to drop into their laps.

On the plus side, the non-player characters are written in exhaustive detail, so the Keeper has more than enough information on their personalities, goals and methods to play them in an organic way and respond to the players' actions. In that sense at least, Tatters of the King is quite a well-written scenario. I made a decision early on to ignore the heavy-handed plotting and run the campaign in a more sandbox style, and the strength of the NPC detail has made that quite easy.

Until the players met Lawrence Bacon, that is.

Bacon's one of the key antagonists, a member of the inner circle of the cult that the players are trying to defeat. What is supposed to happen is that the players fight and kill him, and then, as a result of his death being reported in the press, receive a clue about the cult's whereabouts. The delay between the fight and the news of Bacon's death being published gives the cult enough time to get on with their ritual to bring the city of Carcosa to Earth, leading to an exciting finale as the players rush to get to the cult before the ritual can be completed. It's quite a well-written climax, with lots of interesting choices for the players, and the appearance of Carcosa is quite evocative; I was looking forward to running it. 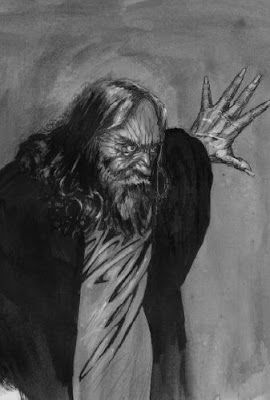 In my Tatters of the King, Lawrence Bacon is far from dead, and not in your general Call of Cthulhu immortal wizard way, either. Instead of the expected fight, the players surprised him -- through use of a spell the campaign gives them, so how this didn't come up in playtesting I don't know -- and subdued him before he could get a single spell off in his defence. Then they made use of their connections to have him committed to an asylum under maximum security, and began to interrogate him about the cult's plans. He is their enemy, so despite their cleverness he hasn't told them everything, but even so they now know where the cult is and what they're planning to do, and they know it much earlier than they should. As a result, they're now in a position to stop the cult and save the world, which is good, but -- and this is the tricky bit -- they'll be able to do it before any of the interesting stuff happens.

It is just not in my nature as a GM to fudge things to such an extent, but I'm left with the problem of delivering a finale to the campaign. There's nothing in the book about what to do if the players are clever and efficient and turn up early to the party, but that's fine as I can make it up for myself; the bigger problem is that sneaking up to the cultists and bashing them over the back of the head before they've had a chance to summon a single byakhee doesn't seem like much pay-off for months of play.

Perhaps I am worrying too much. One of the more interesting aspects of the cult is that a key member -- Alexander Roby, the asylum inmate who involved the players in the first place -- isn't a villain in a traditional sense; he does want to bring Carcosa to Earth, but only so that he can live there, and it's his colleagues who want to use the city to then summon a Great Old One. As written, the climax involves the players having to figure out how to remove Roby from a place he considers to be more or less heaven; the most efficient way is to kill him, but can the players get past the rest of the cult to do so? Even if they do, can they make that choice?

It's a good, meaningful ending, and it more or less remains intact in my version of the campaign, except that it won't be taking place against the backdrop of Carcosa. So my gut reaction is to let it all play out as it will, but I worry that it won't be enough of a dramatic ending for my players after all the work they've put in. Am I concerned over nothing?