The Fellowship of the Railroad

As previously reported, we wrapped up our Call of Cthulhu campaign a couple of weeks ago, and with our Pathfinder campaign(s) still on hiatus, there's been a bit of a gap in our gaming schedules. 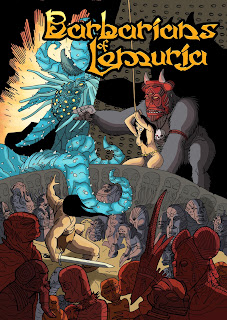 Stuart stepped into the breach first with a Barbarians of Lemuria one shot and his thoughts on the game prompted some of my own. As he says in his post, the scenario was a bit linear to say the least, but the restrictive plot didn't grate quite as much as that of Tatters of the King. I'm sure part of this is because I was playing the former and running the latter, but I also think it may have something to do with genre expectations. We were playing a game of pulp fantasy, so when we were looking for a lost temple and Stuart told us we were on an island with a volcano at its centre, of course the temple had to be there, but it didn't matter because that's how the genre works.

It was a fascinating contrast with the heavy-handed approach of Tatters of the King, and it's made me wonder if all those old Chaosium scenarios that led player-characters on a path from "letter from distant relative" to "going insane at the sight of some blobby thing" weren't as unimaginative as I once thought, since they were only playing up to genre expectations.

Following that, we decided to have a go at The One Ring: Adventures over the Edge of the Wild, the latest Middle Earth roleplaying game. Through a convoluted series of negotiations, I ended up running it despite not owning a copy of the game, and having no time at all to prepare I decided to run the included starting scenario. It went well enough and I think we got to grips with the game's mechanics, although the players managed to avoid combat on at least three occasions. 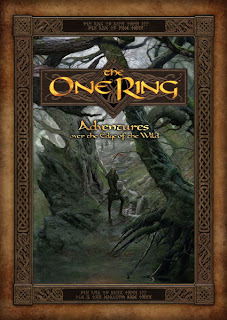 We liked the game enough to play again this past Friday, and this time I had to write my own adventure; I did manage to find a free scenario Cubicle7 had put put to promote the release of the game, but it's set at the opposite end of the game's campaign area, which is none too helpful. All was not lost though, as I discovered that underneath all the modern mechanics and elegant integrated game design is a game based around old-school hex-crawling, so I put into action some of the tips and tricks that I've picked up from a couple of years of reading a bunch of old-school D&D blogs and that I've never been able to put into action since I don't run old-school D&D games. I wouldn't say it was a proper open sandbox, but it was still quite a change from the more rigid plotting of our roleplaying games over the past few weeks, and it does look as if the system will support such an approach with ease.

I had a better grasp of the game's -- many, but simple -- subsystems the second time around, and we even managed to engage a little with the game's interesting combat system. Overall, I like The One Ring a lot, as it seems to blend elements from some of my favourite games; there are recognisable bits of Pendragon, Shadowrun, Warhammer Fantasy Roleplay and even Rogue Trader and 3:16 Carnage Amongst the Stars in the mix, but it all fits together quite well. Perhaps my only criticism of it is that there's not much actual stuff in the game, and when you run out of interesting orc or spider encounters, there's no real guidance on how to make the setting your own. That said, the rules are so light and abstract that it's not too difficult to extrapolate from what's there.

Our own fellowship looks to be breaking up in a few weeks, but I think we may be adventuring in Middle Earth until then.

PDF
Posted by thekelvingreen at 20:47

Labels: Barbarians of Lemuria, Call of Cthulhu, game report, Kelvin, sandbox, Tatters of the King, The One Ring