Rogue Trader Session 05: A Game of Thrones (But Mainly Assassinations)

Aphesius Alesaunder, zealous yet charming missionary of the Imperial Cult. (Manoj A)
Maximillius XVIII, tough-as-nails technician from a death world. (Ben F)
Octavius Sol, seneschal and quartermaster. (hovering about in the background, as Stuart F has fled to the Antipodes)
Triptych, mutant navigator and his harem. (Ric R)


Last time, the player-characters had assassinated the unpopular ruler of the Mianded system, and I got the distinct impression that they had decided to crown his enemy, Kaltos, despite the general populace seeing him as a terrorist. Well, the session started off going in that direction, anyway...

This was a bit of an odd session for me, as I was all set for a quick resolution to last week's action, then moving on to another part of the sandbox. Instead, the players stuck around and spent the entire session getting involved in some proper Machiavellian scheming. They started off by encouraging an official period of mourning for Flavion, at the same time secretly encouraging the disenfranchised to make their opinions of the deceased lord known. Then they had their Rogue Trader come planetside to declare the return of the Mianded system to the Imperial fold, an event which prompted Flavion's loyal guard to come out of hiding to attempt an assassination. This was foiled by some smart thinking by the players, as well as a heroic camera opportunity from the priest as he abseiled out of a shuttle into hand-to-hand combat with the assassin; the guard had been softened up by some freaky mutant mind mojo from Triptych, but the navigator chose to conceal his involvement.

The player-characters then arranged for Kaltos to come to Antiriad in order to take the throne, which was, of course, a trap. They convinced Flavion's guards to do the deed, and promptly betrayed the assassins by gassing them into unconsciousness once Kaltos had been killed, plausibly expressing regret that they weren't in time to save the visiting lord. Knowing that a handful of assassins had never come forward and were still at large, the player-characters then made it seem that not only did Kaltos survive the attack, but that he was going to be formally accepted as ruler of the Mianded system by their own Rogue Trader at an exclusive social gathering; these details were leaked to the remaining assassins through secret back channels the player-characters discovered through a drug-assisted interrogation of the survivors of the Kaltos assassination. They then emptied the planet's prisons, dressed the criminals up as the upper crust of Antiriad's nobility, and brought their ship, the Banshee into a low orbit directly above the party location. 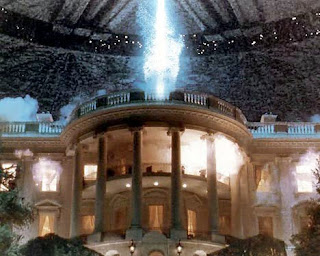 The decoys dressed up as Kaltos and the Rogue Trader were both killed during the dinner as the remaining assassins revealed themselves, at which point the player-characters ordered the Banshee to fire its massive space lasers at the party. The weaponry, not being designed for such use, lacked accuracy and power, but still managed to raze the building to the ground, as well as a number of surrounding, and occupied, dwellings.

So, yeah, shock and awe.

Satisfied that they'd made their point, the crew of the Banshee left a garrison to watch over things until their return, then hopped back into the Warp for the journey back to Jameson's Hollow, to sell the robots they'd captured a while back.

This was a very easy session for me to run, as the players ran away with their ideas, heaping on twist after twist, and all I had to do was sit back and let them know which skill rolls to make. So I didn't get to use my new spangly starship combat system (hint: I stole it from another game), and the crew haven't gone anywhere new, but that's fine, because we're having fun with the sandbox style of play, something I think none of us have done for years.

PDF
Posted by thekelvingreen at 21:02