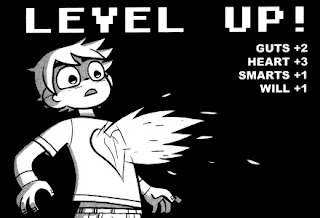 Yesterday's Pathfinder game saw the party members getting to sixth level, after a rather cynical -- on our part -- bit of wandering about the map, fishing for experience points. A common criticism of Pathfinder's rival D&D4 is that its mechanics make it feel like a video game, but I think it's fair to say that our tactics last night were more than a little inspired by the grinding of many a computerised rpg. Which is not to say it wasn't fun!

Last week, the party investigated a series of ruined elven towers deep in the woods in the western part of our realm, but we ran out of time before we could tackle the large central tower. Picking up from where we left off, the party entered the building and discovered a rather obvious floor trap, which the changeling rogue Olban disarmed with ease, allowing the group to ascend the stairs to the upper level.

There things started to get strange, as the party entered what seemed to be a wooded glade under a sky lit by alien stars, and yet it was still a room within a tower, with windows looking out onto the courtyard in which the party had fought the quickling not a few minutes before. As if this was not disorienting enough, the room/clearing also contained a beautiful elven woman -- a baobhan sith -- who began a seductive dance as the party approached.

Alas for her, the only target she managed to entrance was the party's faithful warhound Cujo, and while the poor beast panted happily for her attention the rest of the team moved in for the kill. Sensing danger, the maiden unleashed an entangle spell, which was quite successful in slowing down the majority of the party, but only delayed the inevitable. A short scuffle later, and the strange thing was killed, fading away into nothingness as it died, and restoring the room to normal.

Having come out of the experience with fewer bumps and bruises than expected, the party decided to take the opportunity to explore the surrounding area, having been prevented from doing so beforehand by matters of state. Along the way a trio of grizzly bears were discovered, but the elven druid Cassie used her secret knowledge to calm the creatures, and the party managed to pass without a fight. Later, the heroes came across the lair of some kind of huge burrowing animal and were almost caught out as the occupants -- some kind of chthonic variant of the ankylosaurus -- returned home from an afternoon's foraging. These beasts managed to split the party but were unable to take advantage of the situation, and were brought down, albeit not with ease. Despite having rested, the ongoing fighting and exploration was taking its toll on the party. 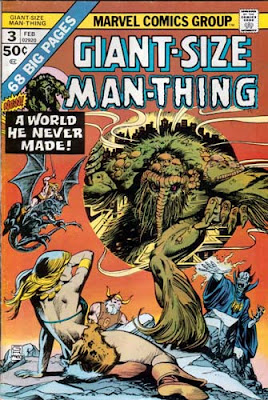 The group decided to make one last push before heading back home, and ran into a pair of shambling plant things, each a mass of mud, vegetable matter and animated roots. The tengu monk Wu Ya found his effectiveness diminished as the extra little kick -- no pun intended -- gained from his amulet of shocking fists seemed to heal the creatures so he was forced to resort to basic attacks.

(Stuart has commented on Wu Ya's increased damage output of late, but I think it's easy to forget how much of it comes from enhancements. The amulet gives the monk an extra 1d6 damage per hit, but stripped of that, he was only doing 1d8+3 with each attack, and the plant-things weren't vulnerable to his stunning fist ability either.

On a more positive note, this week Stuart's character Artemisia dragged herself out of her low damage slump of the past few sessions. It's a recurring joke that Stuart does better when someone else rolls his dice for him -- his son exemplifies this best, rolling strings of 20's while Stuart himself barely rolls above a 4 when he picks up the dice -- and it proved to be the case this session, as he was absent this week, but his character was more potent in combat than she has been when he's been driving.)

Perhaps sensing weakness, one of the plant creatures grabbed the monk and began crushing him to death -- 42 hit points to 12 in one round! -- but all the while Artemisia the barbarian was hacking away with her greatsword and Olban was darting back and forth, stabbing away with his twin rapiers, and the creature did not live long enough to crush poor Wu Ya. As it was, the barbarian's warhorse dealt the final blow, crushing the thing to so much mulch beneath its mighty hooves. Battered and bleeding, the party decided to head home, but each of them felt stronger and wiser from the experience.

Level six! There was a bit of grumbling about this at the table, to the effect that sixth level holds little of interest for the other classes. The monk, however, seems to have something funky going on at each level -- Rick observed that the reason that Pathfinder monks don't get easy access to the game's prestige classes may be because the monk is already a prestige class -- so I have no complaints. It's a long haul to the next level though, as we've got to earn around 12,000xp. Each!

PDF
Posted by thekelvingreen at 14:37