My infrequent Savage Eberron game borrows the character generation rules outlined here, which give starting heroes the equivalent of two free Edges. This makes them more powerful than standard Savage Worlds characters, but I think that's in keeping with the tone of the setting. With that said, I present a new race, the half-giant. 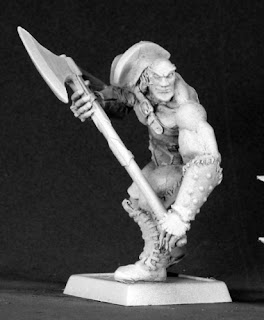 Half-giants were introduced to Eberron in Secrets of Xen'drik, which lifted the mechanics straight from the Expanded Psionics Handbook. This is in keeping with the stated design goal of the setting that "if it exists in D&D, then it has a place in Eberron", but since the half-giant in the EPH is itself lifted wholesale from the Dark Sun setting, complete with psionic abilities and a partial immunity to the desert heat, it's a bit of an odd fit. In all fairness, the designers make an attempt to fit the race into the setting, positioning them as an engineered species, constructed by the Inspired from the giants of Xen'drik, then returned there to act as heavy labour in the Inspired's projects on the continent. Even so, it's a bit of a glaring fudge if you ask me, so I've decided to go for something much simpler and have them be the result of unions between humanoids and the native giants of Xen'drik.

PDF
Posted by thekelvingreen at 12:31