Musings & thinking ahead to the next campaign!

Setting search
I am wondering what setting I’d at some point like to run some non-generic fantasy in. As much as I am enjoying Kingmaker, it is a generic-quasi-Greyhawk setting (magical Europe)…. And in that respect it feels limited/ limiting… and even non-magical…. (no worries to those playing it - it is still a blast - I am just aware that I need to also slowly plan ahead - it is How I Am ;)
But what next (as in in 2+ years time)…. Various settings interest me: 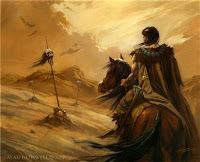 Post-apocalyptic world – taking some of the ideas from Dark Sun – but in a different political setup.

1600s Europe – ala Solomon Kane (but not a replica of that) – Gothic – black powder weapons, clockwork, think Sleepy Hollow.

Party concept
I also have another conundrum –what kind of adventuring party concept? I like to set up a game, in liaison with the Team, as to what kind of party angle they would like a stab at, as well as what kind of game….. Having made the guys I game with play good pcs, and with Stuart chomping at the bit to play more of a ‘grey’ moral pc, (ala the anti-heroes of old, as well as Conan/ Fafhrd being heroes who were also pursuing self interest)… I am keen to have a party set up which captures those possibilities…..


Witch-hunter setting/ campaign - fleshing it out a little
Reasons for joining the witch hunters: personal gain, joy in hunting, with one party member possibly playing the role of a believer in the cause, but also believing in using whatever tools (eg other pcs despite their greed), and methods they can (since they can rationalise anything in their warped ethical code)

Style of game....thus you have a party moving through the countryside, like in The Witchfinder General, hunting down trouble - for gain (honour, gold, power, women's favour, fear of locals, etc). It could also be part urban - Gothing up Ptolus for example - its backdrop of the Spire, and all the undead in the graveyards is a perfect backdrop for a Gothic witch hunter game for d20.

Development. Of course - as pcs progress, the game could explore how the pcs develop - or otherwise - a broader perspective - eg morality etc - but initially - for 5 levels or so – the game could encourage them to act it out as immoral basterds doing pursuing self interest in the name of their gawd.


Technology levels: I am thinking the backdrop would be airships, guns, etc - but these would add flavour initially - rather than being the centre of attention, eg the party could have either a pc or maybe better npc arcane mechanik in their mercenary band who helps upgrade gear - so long as the pcs get them the resources they need to do the work on their portable workshop inside their steam-wagon. Defoe is of interest here - with the zombie-apocalypse as the backdrop, and the famous scientists of the day pressing fast-forward on the tech levels as they try to create better guns and tech to beat the zombie hordes - applying ideas from Deadlands to 1669 England.

System: either
Pathfinder – with classes such as the new ones from the APG: inquisitor, alchemist, cavalier (?)… as well as old ones: paladin, cleric, rogue – with tech levels – I prefer those of 1600AD-ish for this .. OR

WFRP could be the other setting/ system for this game of course. 3e or 2e this is the question!!

Plenty of loose ends here - assuming I stick with this concept:


More musings another time. Time to bust a groove now and do some work!