I've decided to have a go at Jeff's brilliant idea. First of all, here are the rules:

I don't think I've ever owned a single issue of Dragon, so I'm breaking the rules already. Delving in my rpg box, I have uncovered White Dwarf #67, from July 1985, somewhere in the middle of the magazine's Back When It Was Good period. 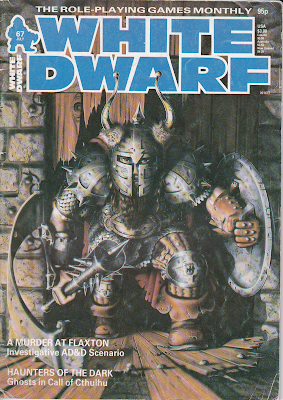 In this post, I'm going to go through the magazine and pull out the most useful material as it strikes me. In the next post, I'll try to meld it all together into a playable campaign.

Let's start with the cover, by Mark Bromley. We've got a warrior -- perhaps a proto-Warhammer Chaos Warrior -- bursting through a wooden door, only he's not. From his pose, we can see he's not moving forward with any great speed, and yet the door has been smashed to the ground, and one of the metal hinges has been bent out of shape. This suggests either that the warrior is moving through a gap someone else has already made, or he's of such great strength he doesn't have to take a run up to annihilate a wooden door. It's also not clear if he's human; there's an element of dwarfishness to him, but the door also seems to be scaled to his size.

Jeff's cover star became the main villain of his campaign, but I don't think this fellow is destined for that. Instead, let's say he is a dwarf, and let's also say that he's possessed of some kind of Juggernaut type ability with which he can deliver massive kinetic blows without a run up. Behold the Juggerdwarf!

Inside, we've got adverts for what appears to be a Games Workshop edition of Middle-Earth Roleplaying as well as Grenadier Miniatures' UK division. There's not much there to steal, although the Grenadier page has a photo of a samurai taking on two ninjas, and that's worth importing.

After that, there's a nomination form for the Games Day '85 awards, including an award for "Best Games Magazine"; given where the form is printed, and that Games Day is run by Games Workshop, I'd be surprised if the Dwarf did not go on to win this one. It does give me the idea of including some form of -- potentially rigged -- election or contest in the campaign.

After that there's the contents page and a superficial editorial from Ian Livingstone -- perhaps the above election is to install or depose a limp figurehead -- then a three page article on ghosts in Call of Cthulhu. Since this is actual game material we should use it, but it's also quite detailed, so ghosts will be a big part of the campaign and they'll have lots of special abilities as per the article. I am not turning down the chance to use a power called "Psychic Violence".

More adverts follow but there's little to swipe, aside from this delightful fellow from a strange graffiti-inspired advert for the UK series of D&D modules: 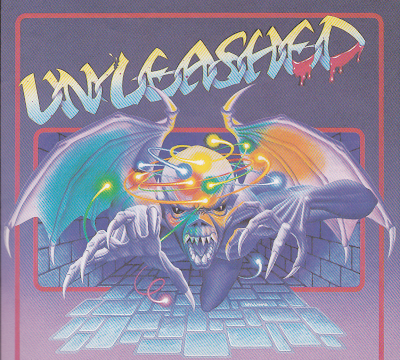 I'm not sure if this beast appears in any of the scenarios, but he's in the campaign, disco lights and all.

Reviews follow, for Star Ace, the second, third and fourth Dragonlance scenarios, and Monster Coliseum [sic] for RuneQuest. There's not much to borrow from most of the reviews, but the colosseum is in, so somewhere in the campaign setting will be a place where characters can fight captured monsters and perhaps gain employment; someone has to go out and capture the things in the first place, after all. Reviewer Oliver Dickinson has a moan about the price of the boxed set -- £16.96, or just over £40 in today's money -- so that'll be a feature of the campaign colosseum too; while it's a popular entertainment, it is considered expensive, but then it's the only game in town... until the players get involved.

Dave Langford's book reviews are next, and the most interesting thing here is the review of Brian Aldiss' Helliconia Summer, which makes me want to include great big century-long seasons in the setting. The next article is a piece on barbarian magic in RuneQuest, so we'll borrow that too, which means that we have to make room for a barbarian culture somewhere.

Thrud the Barbarian -- king of the aforementioned culture? -- follows, with Lymara the She Wildebeeste using her ample curves to distract some opponents before beheading them. That's all there is to the strip, but I'm sure we can find a space for Lymara and Thrud in our campaign. After that we have the first of the issue's scenarios, Peking Duck, a multi-faction brawl set in a Chinese restaurant in modern-day London, and with statistics for Champions and the mighty Golden Heroes, now known as Squadron UK. This may be difficult to include in a fantasy campaign without considerable modification.

Then we have an episode of The Travellers -- see a digitally remastered version here -- involving an NPC patron with arbitrary, dice-based reactions to the protagonists. Of course this is in. Facing this is a single page article on social customs in Traveller; it's basic stuff, but it prompts me to decide that social rules and customs will be a big part of this One Issue Campaign.

More adverts follow, then a mystery scenario for AD&D1, A Murder at Flaxton. Or rather, the first page of said scenario, then an early pull-out Citadel Miniatures catalogue. It features Citadel's The Lord of the Rings range -- I'm not sure if we can use that -- as well as some great hobgoblin and orc miniatures; as such, hobgoblins and orcs will be the major humanoid races in the campaign. As an aside, a set of three Citadel miniatures would have set you back between £1.50 and £1.95 in 1985, or about £5 in modern coinage. Hobgoblins are 60p each!

A Murder at Flaxton is an investigative scenario involving dwarf smugglers -- as in smugglers who are dwarves -- slavers and pirates. It's a low-level scenario, with the NPCs hovering around third level, but it might make for a good starting point. Aside from the maps, the main illustration is what looks like an early John Blanche piece showing dwarves drinking from bottles of Bugman's Best Rum, implying that the scenario is set in the Warhammer world. I don't think we'll go that far.

Even more adverts follow, including one with a picture of a nude woman with very 80's hair, make up and earrings, covered in blood and wielding two glittering swords. As a modern enlightened male, I of course deplore such horrible, exploitative cheesecake, but as a gamer I recognise that it's so over-the-top that I have to include it somewhere. After that there's the letters page, which like every other White Dwarf letters page in history is full of people moaning about how wrong White Dwarf is getting pretty much everything; the campaign will feature a bunch of grumpy old dwarves who can't stop going on about how rubbish everything is. They may be involved with the rigged election.

Following that, we have two pages on various different ways spiders in AD&D1 can kill a character. I doubt anyone has ever used this in the twenty-five years since it saw print, so let's be the first and make spiders a major hazard in this One Issue Campaign. Then we have more adverts, including one showcasing Games Workshop's seven -- yes, seven! -- shops, and featuring pygmy orcs with parachutes: 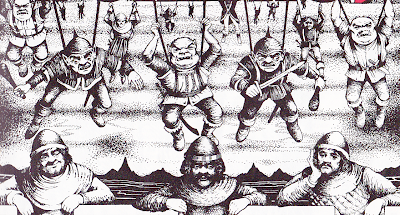 Holy Hecuba in a hairnet, these little chaps are definitely in.

The next article is the good old Fiend Factory but instead of the usual gonzo monsters, we're given the Vivimancer, an odd sort of prestige class for high level AD&D1 characters. It's not clear if this is intended for players, although since they are barred from the Prime Material Plane and only increase in level once every fifty years, I'd guess not. They seem to be a Neutral Good equivalent of the lich and use enchanted flowers to focus their magical abilities; even so, I think we have found our campaign villain.

More adverts follow -- and people say it became a glorified catalogue only after Games Workshop booted out all the rpg stuff -- but one has a picture of a centaur in a bowler hat, so he's in. Then there's Tabletop Heroes, which would eventually become the regular 'Eavy Metal modelling and painting pages, and is here hosted by Joe "Lone Wolf" Dever, although John "John Blanche" Blanche is hovering about in the shadows. There's little of interest here, although one of the figures covered is a Citadel Miniatures Jabberwock, and they're such great monsters that I have to include them in the campaign.

Then there's an article on magical backpacks, all of which have some kind of minor teleportation ability, and I can definitely see them getting some use. Then there's an advert for GURPS which is just pictures of a superhero, a Viking, a British "redcoat", a knight, two stetson-and-sixgun-toting Western characters, a Roman legionnaire and a couple of brutish monsters; this mismatched group will find their way into the campaign, I'm sure. After that, there's a news page, more adverts, the ever-popular small ads -- which could be a whole blog post in itself, although I will note for now that Jonathan Welfare of Tavistock Road is offering the all-new gladiator character class for the bargain price of £1 plus a stamped-addressed envelope -- then two colour adverts, one on the inside back cover for Citadel starter sets -- adventurers and monsters -- and one on the outside for Citadel's D&D miniature line; there are no examples of the latter, although the artwork looks like early Blanche again, and features a warrior and a wizard in mêlée with a green dragon. This pair of idiots may very well make it in.

So there you have it, White Dwarf #67 more or less cover-to-cover, with most of the playable material stripped out. Next up, I'll try to turn that lot into a campaign. I will also be choosing a ruleset, which I should have done at the beginning, but I'm a maverick, and if the pencil-pushers at City Hall don't like that, then they can shove it!

EDIT: The second part of the exercise can be found here.

PDF
Posted by thekelvingreen at 20:12