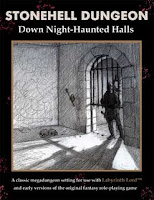 A couple of years ago, a group of gaming bloggers came up with the idea of the one page dungeon, which is -- as one might expect -- a dungeon map designed to fit on one sheet of paper, including all rules and statistics. It was designed to make building megadungeons easier, and the epic Stonehell was one of the first prooducts of the format, as fine a proof-of-concept as one could ask for. The Chatty DM goes into more detail on the history of the concept here. 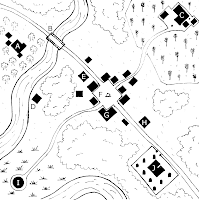 I've not entered before, and I had not intended to enter this year, but when the 2011 contest was announced, I realised I already had a one page dungeon, and so decided to submit it. I had no expectation of it getting anywhere, and to be honest, I entered it more so it would gain a bit of exposure to a wider audience; this worked well, as the number of downloads shot up soon after it was entered.

I was pleasantly surprised to wake up this morning and discover that this year's contest winners had been announced and that my scenario is among them! I suspect I may have won by virtue of submitting the only horror-themed scenario, and I'll have to buck up my ideas if I'm to enter again, but it's still an exciting bit of news.

Congratulations too to the other winners, and thanks to all the other entrants, who nonetheless worked hard to get their adventures done in time for the competition deadline. You can download all the entries in one pdf bundle from the contest page.

PDF
Posted by thekelvingreen at 08:21