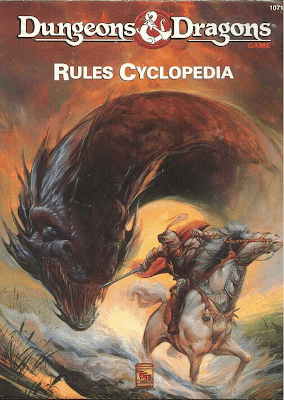 My gaming group has become rather splintered and scattered on occasion as real life has intruded on all the killing-things-and-taking-their-stuff; one way we've tried to deal with this is to play over the internet using Skype. This has not gone well.

I've been wanting to get involved in a Google+ game for a while now, in part to play something different, but my main goal has been to test it as an alternative to Skype and maybe, just maybe, bring my own group back together. Last night I played my first ConstantCon game; the setting was noism's Yoon-Suin and the rules -- although the only dice rolled all evening were by noisms for a random encounter -- were from the good old Rules Cyclopedia. The old-school being what it is, I ended up with a fighter with a single hit point and just enough money to buy a dagger, but I decided to let the dice fall where they may and take up the challenge of getting this fellow to second level.

By chance, this fighter had the highest social rank of the group, being the son of a knight; I decided that the consumptive weakling must have been sent out into the world by a disapproving and disgusted father who not-so-secretly hoped that his son would trip on a rock and die, leaving the way open for a more suitable heir. Joining poor Kirti on his travels were Pabali, the erudite but disgusting Slug-Man wizard, the bold and brash warrior Subanara -- and his dog Rotgut -- and the magic-using-son-of-a-prostitute Matrika.

I have not played basic D&D in about fifteen years, and then only a handful of times, but it was easy to get into the right mindset and the looser play style was quite refreshing after all the number-crunching of Pathfinder. As mentioned above, we didn't get to use any of the numbers on our character sheets, but even so I was surprised at how quickly we all developed characters, whether it was Pabali's arch loquaciousness or Matrika's devotion to Yoon-Suin's class system. Perhaps most surprising was how quickly we all fell into this roleplaying, even though we were all strangers to one another; I could waffle on here about putting on an act and how a false persona might make interaction with strangers easier, but I'm nowhere near pretentious enough to try.

Our group sniffed around and from a sizeable list of potential adventures chose rumours of a terrible old eunuch roaming the local villages and frightening the peasants by spouting gibberish at them and leaping about like a grasshopper. We decided that an insane old man was at just about the right power level for a bunch of first level characters to take on -- although Subanara suspected that the old geezer had to be a dragon in disguise -- and headed out from the city. Travelling from village to village collecting information -- including the possible whereabouts of one village's secret stash of copper pieces -- we found a local wise woman who told us more about the old man, suggesting that he was both immortal and cursed, and that he tended to manifest at twilight or in the early hours of the morning. Having missed the former, we decided to camp for the night and look for the wretch in the morning; the wise woman -- who was neither as old or haggard as cliché demanded -- was reluctant to let the party rest in her tent, but Matrika convinced her to at least let his "master" Kirti rest within. While Kirti was not and had never been the magician's master he kept quiet as he suspected he might not survive a night in the open air.

The game was good fun, and I look forward to another session and perhaps even rolling some dice, although I suspect any such situation will not end well for Kirti. It also answered my questions about the use of Google+ for gaming; it seems more stable and efficient than Skype, and I've recommended that my regular group gives it a try next time one of our members is unable to attend a session in person. If Google would integrate a dice roller into the package, it would be just about perfect.

PDF
Posted by thekelvingreen at 21:57