Stuart has a good post up here in which he digs out a number of historical examples of people of African origin running about mediaeval Europe, thus challenging those who don't want to include such characters in their fantasy role-playing games to come up with a better excuse for the omission than historical accuracy. It's a good, simple post that gets right to the heart of the matter and should wake a few people up. 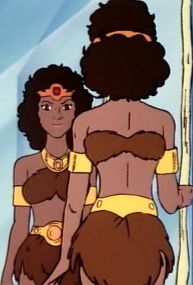 The thing is that I don't see why Stuart needed to make the point in the first place. I've seen similar arguments come up before about technology levels; whether such and such society would have access to such and such weapon or armour or whatever. If we were setting our games in Northern France in 1450, then I could see the value in pursuing such detail, but for the most part we're not. We're playing in Greyhawk, or Aebrynis, or Titan; I don't see why it's important to know whether crossbows were available in 1450 when said crossbow is going to be used against a mind flayer, a creature I don't think was ever common in Europe, but then I only got a B in my history GCSE.

Having put The One Ring aside for a rest, we've been playing a bit of Warhammer Fantasy Roleplay, set in the Border Princes, the Warhammer World's version of the Balkan region. We've had one session of actual play so far, and I don't know how long we'll play before something new and shiny comes along, but it's been good fun so far, as WFRP tends to be.

It's not quite new -- although it could be argued that "shiny" is an appropriate adjective -- but I've made a bit of progress on my conversion of Dark Sun to Savage Worlds; Savage Sun seems a fitting title. I've got some character generation rules worked out and I think I've come up with a good way to emulate the setting's magic system; my conversions are rather lean, simple even, but seem to do the job. I think my experience of converting Eberron over has helped me understand what's necessary to transfer to maintain the original feel of the setting, rather than fuss about copying every single detail. I need to put the conversion notes together in one place -- at which point I'll post them here -- and come up with a starting adventure, and then Savage Sun will be ready to go!

PDF
Posted by thekelvingreen at 16:09