Over the past few weeks, I've been running my group through the fifth edition Dungeons & Dragons playtest. I will admit that I was not optimistic as I hated D&D4 and while I've enjoyed playing Pathfinder, it's more complicated than I like. I appreciate the retroclones for how they've opened up old-school gaming to a new audience, but most of them have mechanics or assumptions that I find difficult to accept; the notable exception to this is James Raggi's Lamentations of the Flame Princess, which I've mentioned before. It has the simple mechanics I prefer, but introduces a number of welcome tweaks to the basic D&D system, making it close to my perfect version of The Game. 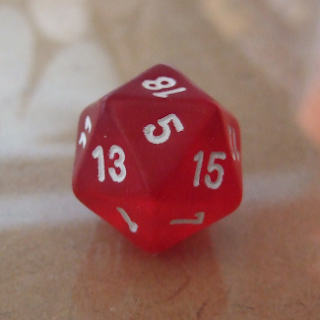 All that said, D&D5 has impressed me. It has the same kind of mechanical simplicity as Basic D&D, so I can run it without breaking my brain, but it also seems -- the character generation rules have not yet been released for testing -- to provide enough complexity on the characters' side to keep my players -- who missed the mechanical options of Pathfinder when we played LotFP -- interested and happy. It does have some problems -- player-characters are perhaps too tough at first level, and spells are a bit erratic in terms of power; sleep in particular is either useless or overpowered, depending on the target -- but it's a first draft playtest, so such glitches are to be expected. My big fear for the final published product was that it would add more and more complicated parts to keep the D&D3 and D&D4 fans on board, but recent comments by Mike Mearls have suggested that a simple and streamlined core rules package is a goal for the design team, so I have high hopes. If all else fails, we'll just carry on playing it using the playtest documents!

Also on the way -- but arriving much sooner -- is the sixth edition of Warhammer 40,000. I entered the Games Workshop Hobby™ during the Rogue Trader days, but the boxed second edition of 40K was the one I played the most. I stopped playing with the release of the third edition, in part because I disliked some of the rules changes, but for the main part because of my two armies -- a Genestealer Cult and a small Ork force -- the first was invalidated by the edition change -- although an army list was later published in the Citadel Journal -- and the second was rendered unplayable by the game's general reduction of points values. I did pick up the fourth edition second hand but never played it, and the fifth passed me by; from what I can tell, the latter releases have been minor tweaks and polishes of the third, and as I never much liked that ruleset to begin with I haven't been moved to get involved again. The modern game looks absurd to my old eyes, with so many vehicles crammed on to a table that's far too small for them -- back when I played, the only vehicles available were the Rhino and the Ork Battlewagon -- making it look like a game of Space Marine played -- to paraphrase John Peel -- at the wrong scale. As such, unless the sixth edition brings revolutionary changes to the mechanics, I doubt that I will be signing up, but even so I've found myself interested in playing the game again.

Part of this is due to gaming at Stuart's place; while I've been enjoying our fantasy and historical battles, the Grim Darkness of the Far Future™ has always been where I've felt most at home. 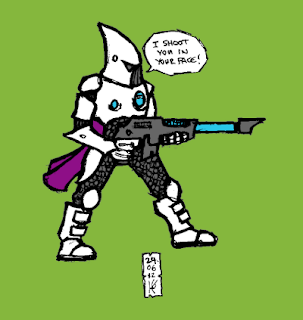 Part of it is to do with recent nostalgic discussions with friends who either play or used to play, and part is in discovering people like Warhammer Joey, who show such an honest enthusiasm for the game. I'm sure the announcement of the sixth edition had something to do with it too, even if I never buy the thing.

So I've decided to dip my toe back in and put together a small 500 point force. I'm going to go with the Eldar, as I had an Epic-scale army but never got a chance to see them in action in 40K; no one I knew had an Eldar army and they always seemed rather neglected by White Dwarf. I'm going to make no effort whatsoever to make it a competitive army and the troop choice will be made on the basis of the models I like, which in most cases means the older pre-third edition designs. I tend to have a 40K craving once or twice a year that comes to nothing and this one may also fizzle out, but we'll see.

Of all upcoming gaming releases, the most exciting for me has to be Call of Cthulhu's seventh edition, which I believe is going to be getting a preview -- if not an actual release -- at this year's Gen Con. I suspect it won't be too different to the previous six editions, but I've heard that the new rules will have some innovations; much as I love the game, it could do with a bit of mechanical tweaking in places, so I'm keen to see what the writers do in this regard. I own two previous editions and don't need another one, but I'm on board anyway, because it's one of my favourite role-playing games.

All in all, I have plenty to look forward to in terms of gaming in the next few months, but I'm a little wary of the effect all this will have on my bank balance!

PDF
Posted by thekelvingreen at 13:42