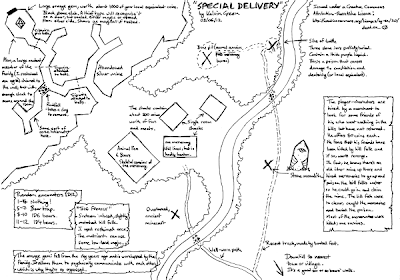 We wrapped up our second Lamentations of the Flame Princess adventure last night; second and perhaps last, as while it's close to being the perfect version of Dungeons & Dragons for me, I know that not everyone in the group is anywhere near as keen.

Anyway, I've scanned and cleaned up my scenario notes from the game, and they can be downloaded as a sort-of-a-One-Page-Dungeon here. For those interested in the tension between preparation and play, it took about a couple of hours to put together and gave us two four-hour sessions of play, although there was a fair bit of faffing about in the first session. I've dropped most of the LotFP-specific statistics, so it should be easy enough to import to your game system of choice.

Thanks to the Queen -- not of the Demonweb Pits -- giving everyone a couple of extra days off work, we should be meeting again tomorrow, this time to either play a bit of RuneQuest -- I haven't played since a total party kill about fifteen years ago -- or perhaps the D&D5 playtest, if I can get my head around the adventure in time.

PDF
Posted by thekelvingreen at 14:38

Labels: game report, Kelvin, Lamentations of the Flame Princess, map, one page dungeon, scenario, stuff you can use