Bite to the death.

So, I have a dental appointment at the beginning of Dec and hopefully wont be toothless for Christmas otherwise I'll be blending my turkey. What the fuck am I talking about ? God knows but it got me thinking about various biting issues I have come across. Now the bite is one extra attack in most cases so perhaps not as concerning in and of itself (Dragons aside) but, like a most orthodontic issues, there are consequences in the long run for not taking teeth seriously enough.

As a GM I have sneaked in the odd rabid dog into an adventure, which is particularly amusing when high level characters are concerned as they often try and brush off the details. I reminisce one particular Rolemaster party of 30+ level players that slayed their way through a cave complex to an insane Demon. Though they barely paused to wipe the orc blood off their clothes, one of them did pick up a scratch from some nasty guard dogs. Instant lycanthropy of course. Whilst the player hardly remembered the incident he was concerned to be having blackouts every month and finding his home both trashed and smeared with body parts. Oh how we laughed..

So, there have been plenty of dramas of late concerning the paradigm between the Werewolf and our other fiendishly fanged friend the Vampyre. I'm thinking of the Underworlde series of films but also Being Human come to mind as well as others I am sure you can think of. What happens exactly if and when one bites the other has been an interesting subject, however I do feel that humans are under represented here...
Now follow my logic - should a human be attacked by a werewolf of course its often a foregone plot device but I'm not so sure about this. A defenceless human being attacked by a werewolf would be quickly mashed one would think but what if the human got in the first bite ? Perhaps even with the help of a surprise advantage ? Why would this matter ? Well, for all of you burgeoning dentists and Van Helsings out there you will of course know that our fillings are more often or not made from amalgam, which  consists of: mercury (50%), silver (~22-32% ),  tin (~14%), copper(~8%), and other trace metals. Well its the 22.32% that matters they say and a possible fatal wound for the werewolf. Though the relationship between Silver and Vampyres is a little less clear I would say, I think its just a matter of getting the fillings blessed first and pretty much the same strategy can be adopted, though sneezing power is always handy in such a dilemma.
So to the moral of the story, if you come across any Goth like pale faced people eyeing you up in the evening or perhaps a particularly hairy person sniffing you from a distance in the local country pub after hours, don't hesitate, get your bite in first! 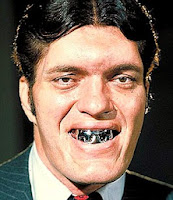