For the most part game mechanics should be the perpetual angelic child that is seen and not heard as far as a clean gaming experience is concerned. One cannot of course help but take note of particularly slick systems due to the abundance of poor  mechanics at the other end of the spectrum and it is an often visited subject at the club.
The Feng Shui system has left me in two minds regarding this. As eye wateringly fun as the content is I was left with the impression that after the last action packed episode that we had after a coupe of hours gaming only actually completed one round of play. Now to be fair, we had split the party up and were all baying for the GMs attention so this was always going to test GM Jack's sanity as well as bending the system in several directions. It is also not all that uncommon for a particular session to slow when everyone is off doing different things, more so in various combat or hand to hand scenarios.
However things are not all that they seem. Feng Shui basically creates a points ladder upon which every character is placed according to a starting initiative and as actions are expended by all concerned, npc's included, everyone slowly jumps down the ladder. All the GM has to do is count down the ladder until each character is encountered and an action performed whereupon they are moved down again - as characters leave the action they are removed from the ladder. As a picture is still worth a thousand words here is what I am trying to say 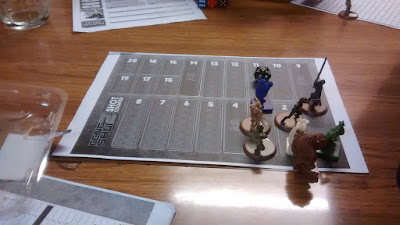 I did find a reddit on this so in someone else words:
"
Everyone rolls a d6 and adds their speed, this is the "shot" they act on. The person with the highest shot goes first. They perform an action which has a "shot cost" and their "shot" is reduced by this cost. After the highest shot goes, the GM counts down by ones and everyone whose current shot is that number goes.
Example: I rolled a 5 on a d6 and have a speed 8 so my starting shot is 13. I have the highest shot so I go first. I do a regular attack which costs 3 shots, I perform my attack and my shot is now 10. Once everyone with 12 and 11 goes, I get to go again. If multiple people have the same shot number, PCs go first and if multiple PCs have the same shot number, they go left to right from the GM.
"
So the upshot is that actually this isn't a round as such but a sort of collective noun for several rounds. I don't known what that is...rounders ? Either way we are now at the bottom of the ladder after which I can only presume we roll our shot dice again and like all things in life it's a matter of understanding it properly to appreciate how it works. 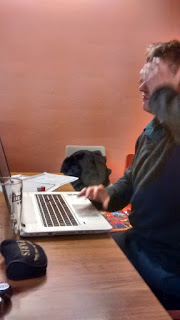 The rather large cave troll figurine represents the head chef in a kitchen where I am having a slight altercation. I hadn't realised he used to work for Sauron but either way he has an empty Pizza box belonging to me that needs to be recycled properly so a gunfight is now ongoing. That makes me an eco warrior of sorts I suppose. Above is a quick shot of GM Jack mid game when we are all trying to ask stupid questions.