Rogue Trader Session 09: These Are My Investigating Feet


Ever since the explorers stole the star charts from Jameson's Hollow, the Zeesol system had been calling to them. It had been sealed by order of the Inquisition, and the explorers assumed that the whole sector had been declared off limits for a thousand years as a result of the discoveries made there. That's the kind of thing that really messes with a player's head, as they are simultaneously torn between investigating the big blinking plot hook, and leaving it well alone for fear of losing their character to some blobby alien thing.

It perhaps did not help that I suggested they all watch Alien before the session. 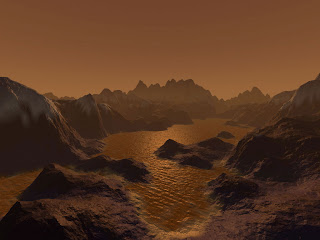 The session began with the team, the Rogue Trader Horatio Locke, the Probably-an-Inquisitor Zarak and his ogryn henchman, and twenty hand-picked guards packed into a couple of shuttles and dropping into the methane-based atmosphere of the planet, where they found their craft buffeted by storms, although the vessels suffered only light damage. Reaching the surface, they had the increasingly-fragile Locke do his I-claim-this-planet thing, before packing him back into a shuttle and sending him back to the mothership. Their sensors had indicated that most of the planet was barren, with the exception of one large structure, shaped like thorns or talons bursting through the surface of the world, and surrounded by a ring of smaller structures.

These smaller bits turned out to be flat slabs of rock, each carved with a sequential number. Guessing that they had discovered gravestones, the explorers dug up the earth nearby and, sure enough, discovered a skeleton laid out with respect, but little ceremony. While pondering all this, the explorers were surprised by a figure stumbling out of the storm, creaking and wrapped in rags. 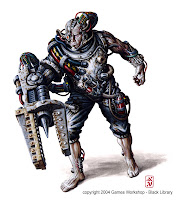 Taking charge of the guardsmen, Mordecai fired warning shots at the shambling thing, and ordered it to stay back. Perhaps it did not hear, did not understand, or did not care, as the shape stumbled on, and the team this time fired at it, and when it still came on, they shot it into tiny little bits, then turned a flamethrower onto the twitching remains for luck. When the no-longer-shambling thing had cooled down enough for the player-characters to investigate, they discovered that what they'd killed was an Imperial servitor bearing the markings of the Inquisition, and that it was thousands of years old. Pondering its value (negligible after their onslaught) and significance (plenty), they headed to the "claws" looming over the site, and discovered that between them was a large hole in the ground, and a path spiralling into the darkness.

"It's a dungeon!" said one of the players, I think Manoj, and how right he was. The explorers discovered a labyrinthine complex below the surface of the planet, some sort of crypt filled with the bones of sentient species, all shelved and arranged with meticulous precision. They also discovered some sort of dark chapel complete with skulls hanging from iron chains and odd murals depicting the torture and murder of various beings; the way the murals shifted in the torchlight had a profound effect on some of the group, and they felt their sanity being chipped away.

The first casualties of the expedition occurred as the explorers discovered a room containing some sort of pit. Triptych used his Warp sense to detect a strange taint surrounding the pit, and concluded that it was some sort of tunnel through the Warp itself, although this discovery was too late for the two guardsmen who'd already blundered into it, drawn by an eerie psychic presence. Still desperate for whizz-bang teleport technology, the group pondered the possibility of harnessing/stealing the warp-pit's powers, but not even the combined knowledge of Maximillius and Triptych could begin to figure out how to transport a literal hole in reality to their ship, so they moved on.

After picking their way through more bone collections, they discovered a locked chamber containing a single skeleton pinned to the ground by a large iron spear. The spear was alien in design, and the worldly and knowledgeable Octavius Sol guessed that it was of Eldar origin; the spear was hot to the touch, even through the thick padded gauntlets of their void suits, and seemed to cause a buzzing, whining sensation in the minds of those who held it. There was a bit of disagreement here among the group as some wanted to take the spear and others wanted to leave it where it was, mainly because they were worried that it was pinning the skeleton down for a reason. In the end, the cautious members of the crew won out, and the group moved on once more.

As they started to reach the end of their reserves of oxygen and battery power, the explorers found a large chamber filled with a bone-like honeycomb substance, which Sol identified as wraithbone, a psychic building material, and proof positive that the whole place was some kind of Eldar temple. Triptych's Warp sight was employed once more, to discover that the Warp taint felt throughout the entire complex originated from the wraithbone in the room, and all present noticed that Zarak, the creepy official they'd brought with them from Jameson's Hollow, and whom they all were convinced was an Inquisitor in disguise, was taken aback by what he was seeing, his impassive attitude dropped for the first time since they'd met him.

Convinced that there was more to be discovered, but wary of their depleted supplies, the team decided to head back to The Banshee to plan their next move, and that's where we left it.

PDF
Posted by thekelvingreen at 20:19