Aphesius Alesaunder, zealous yet charming missionary of the Imperial Cult. (Manoj A)
Mordecai the Cautious, newly-promoted weapons monkey. (David)
Maximillius XVIII, tough-as-nails technician from a death world. (Ben F)
Octavius Sol, seneschal and quartermaster. (An NPC this week, as Stuart F was off exploring the Emerald Isle)
Triptych, mutant navigator and his harem. (Also an NPC, as Ric R was trapped in the hellish dimension known as Manchester)


Last time, the explorers had been witness to, and a possible cause of, a bizarre Warp event which saw the dead rising from the grave. Concerned for their holdings, and curious as to how widespread this effect was, the team decided to head for their stronghold in the Mianded system. Arriving there, they discovered that the restless dead were a problem here too, but due to the way the population of the hive city of Antiriad interred their deceased, in vast sealed catacombs beneath the city, large scale damage had been averted for the time being. Even so, their majordomo Falcone was pleased to see them arrive to take charge.

However, their minds were more on experimentation than liberation,

and the team set about a plan to capture one of the dead for study, before realising that there was a more efficient, not to mention safer, alternative. So they pulled a prisoner from one of Antiriad's prisons, strapped him down, killed him, and waited for him to reanimate. The unfortunate criminal did indeed soon return to a cursed half-life, and the priest Alesaunder began his interrogations, but even his vaunted social skills were not up to the task of communicating with the creature, which though not mindless, seemed set on breaking free of its bonds and attacking its captors.

On a hunch, the explorers took the creature to the Banshee, and dropped into the Warp, at which point the demeanour of the undead thing changed. Its hostile urges seemed to abate somewhat, and its previous personality surfaced, enabling communication at long last. The team discovered that the dead hated the living, envying and hungering for their life-force, but nothing the explorers had seen suggested that there was any transfer of life energy between the dead and their victims; it seemed as if the attacks were motivated by nothing more than an atavistic sense of spite. The dead criminal also told Alesaunder that there was nothing after death, that even existence as a cursed thing was better than the oblivion beyond, and that even the light of the God-Emperor did not shine into the darkness found there. The priest held to his faith, and shrugged this off as another example of the dead's spiteful nature.

Alesaunder called some of his priests to his side in order conduct a ritual to exorcise the undead blasphemy, during which one of his deputies reported that a couple of priests, Douglas and Turner, had not been attending services as regularly as their brethren. The high priest was disturbed by this display of lapsed faith, and set to investigating the matter. He called Douglas to his offices, and found the cleric to be nervous and agitated, clearly distracted by something. Alesaunder turned this to his advantage and quickly broke the man, discovering that he and Turner had found another of the ship's priests, Persaud, wandering the lower decks despite being quite dead. Uncertain of what to do with their brother-priest, they had locked him in a storage room, and went there on occasion to attempt to lay his spirit to rest.

Persaud had been beaten to death, his skull and hands smashed, his jaw broken, and his neck snapped, and was in no condition to communicate, even while the Banshee was in the Warp. He was assigned to give services to the inhabitants of one of the lower engine decks, and the explorers focussed their investigations there, pulling in the chief, a grizzled engineer named Serafina. She told them that she knew nothing about Persaud's death, but she knew of a cult that had sprung up among her people, one that Persaud may have been investigating, although Serafina herself had overlooked the group since their work had not been affected by their new religious leanings. Alesaunder saw this as heresy, and had the chief dragged away for re-education.

Mordecai roughed up some of the local crew members and got the location of the cult's meeting place, a basic mess hall, and Maximillius set up hidden surveillance in the room. For his part, Sol attempted to shadow one of the suspected cult members, but was spotted, his elaborate finery sticking out like a sore thumb in the dark and greasy underdecks, and the crew member fled. Despite this, the cult meeting went ahead, with a number of crew members packed into the tiny meeting room while a short robed figure with a deep gravelly voice pontificated on the subjects of death, how death is a sacred gift, and how these creatures returned from beyond death were a blasphemy to be destroyed utterly, with as much violence as the faithful could muster.

The explorers launched their attack at this point, 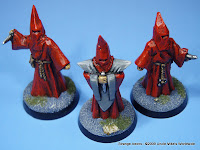 sending in troops armed with stun batons to pacify the crowd, while the team themselves went after the cult leader. As they fought with the panicked crowd, the cultist fled to a side door which had not shown up on Maximillius' plans, and seemed to be cut off from his control, so the explorator was not able to lock it remotely. Mordecai took aim with his twin hellpistols and caught the cultist in the calf, slowing him down, and giving the priest a chance to catch up. Alesaunder put the barrel of his boltgun against the neck of the hooded figure and ordered him to yield, but with a snarl, the figure leaped for the door. A burst of automatic fire from the boltgun shredded the head and upper torso of the cult leader, and the remnants slid to the floor.

While the guards rounded up the last of the cultists, Mordecai rushed over to the leader's remains, intent on restraining them before they rose again. As he rolled the corpse over, he saw that underneath the robes, it was wearing a medallion inscribed with the symbol of the Locke dynasty. Not only that, but the leader's relative lack of height was discovered to be due to him being but a child. With a sinking feeling, the team realised that they had just executed Telemachus Locke, the son and heir of their own Rogue Trader.