On the battle bridge of the Thunderhammer, the explorers fought a horde of undead crew members, while a hulking figure they took to be the captain, Telemon Maul, waded through the mêlée towards Octavius Sol, having issued a formal challenge to the seneschal.

Perhaps it was decided that the dead have no need for honour, or perhaps the priest simply did not care, as he fought his way to Sol in order to aid his ally in the duel. Meanwhile, the rest of the team fought the massed dead, Maximillius swinging his power axe to and fro, lopping off limbs and heads as he went, and the Banshee's elite guardsmen turning their flamers on the shambling dead, their aim guided by their faith in the Emperor, as well as the commands of the battle-hardened Mordecai. The navigator Triptych fared less well, suffering a grievous wound as a lucky knife strike took him in the belly, spilling his innards across the deck. If it were not for Triptych's mutant healing abilities, he would have died there and then, lying amongst his own intestines.

(To run each of the zombies individually would have fried my brain, so I instead ran the mob as one creature with multiple attacks. It had 300 Wounds, and was capable of three attacks against each player-character per round; reduced to 200 Wounds, it would only be capable of two attacks, and once down to 100, it could only attack each character once per round. This was an experiment, but it worked out well, and I'll be using it again.)

Sol found himself struggling to harm his opponent, even with the strange spear he'd rescued from the Eldar ruins, but death seemed to have made the captain sluggish and clumsy, and his attacks went wide, allowing the seneschal and priest to wear him down, with Sol striking the final blow, an attack so brutal it split the captain in two; at this point Sol uttered an inhuman cry, chilling the bones of everyone present, and the seneschal wondered what kind of influence the alien weapon had over him.

Eventually the battle was won, and the explorers found themselves in control of the bridge, but there was still the pressing problem of the 95,000 dead crew members roaming the halls of the Thunderhammer. Checking the logs, Maximillius discovered that the ship's drives had suffered some kind of malfunction while in the Warp, flooding the vessel with deadly radiation, killing many, and allowing them to rise as the restless dead. Outnumbered, the survivors were picked off one by one, before making a final, and apparently futile, stand on the bridge. A number of plans for cleansing the ship were considered, and most rejected as being too impractical, until the explorers hit upon the idea of unleashing some kind of toxin which would destroy biological material. The tech-priest made some quick calculations and came up with a suitable formula and, making contact with his deputies aboard the Banshee, gave them the instructions to mass-produce the toxin. The process would take three days, which matched up well with the distance between the two starships. Now, all they could do was wait.

The Banshee arrived with the bio-weapon, as well as the news that the suspected Inquisitor Zarak had moved to the Rogue Trader Aurelie Moullierre's vessel, the Dark Filament; this concerned the explorers, as they suspected that Zarak was working against them in some way. That would have to wait, however, as they had a job to do. The Thunderhammer's 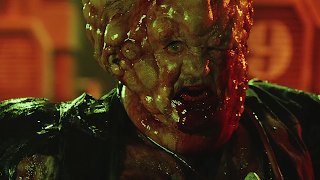 life support systems were loaded with the toxin, and the ship was flooded with the deadly concoction; a day or so later, and the chemical had done its work, melting the dead crew into a greasy mulch. Maximillius vented the poison into space and recycled the ship's atmosphere, making it safe once more for the living, and the explorers set about transferring enough crew from their vessel to operate the massive battleship.

They sent a vox cast to the Dark Filament, informing those present that the Locke dynasty had claimed the Thunderhammer as salvage, and requesting a crisis meeting with Moullierre, Imperial Commander Kruger, and Inquisitor Zarak. A sumptuous banquet was prepared aboard the Banshee, and the dignitaries were made comfortable as talks began on how to deal with the undead menace. In the background, the explorers arranged to have refugees from the abandoned void station moved to the Thunderhammer to serve as temporary crew, and Sol had Zarak's meal poisoned with the same toxin used to deal with Flavion so many months ago, an act he kept secret from his fellows. It was perhaps a prescient move, as Zarak greeted the explorers with a smile, which further convinced them that he was up to something.

It seems that whenever the player-characters get into tense negotiations like this, everything goes wrong, and they start making enemies. Perhaps informing Kruger that they wanted control of his station in exchange for the release of their new bio-weapon was not the best tactic, as the noble became enraged with such double-dealing in a time of crisis and called the explorers' honour into question, which then enraged Octavius Sol, who called for a duel. Kruger agreed, and stormed out of the negotiations, returning to his temporary base aboard Moullierre's vessel. For her part, Moullierre seemed to be amused by all the testosterone floating about, but also asked the explorers if the rumours she'd heard about the alien ruins they'd discovered were true, and that they had explored an Eldar temple. When this was confirmed, she asked them to meet her aboard her own vessel at midnight, before returning to the feast.

After the meal, and with negotiations stalled, the explorers got in contact with Augustus Shtolnik, Kruger's second-in-command, to discuss the details of the duel. Shtolnik informed them that the fight would take place aboard the Dark Filament, and that it would be to the death, although they would be allowed to choose the weapon used. Perhaps under a xeno influence, Sol chose the spear, and went to his quarters to practise.

Leaving the seneschal to his training, the rest of the team headed over to the Dark Filament as requested, and suspecting a trap were surprised to find Moullierre waiting for them alone.

She had each of them swear an oath of honour to not reveal what they would see aboard her vessel, and then led them through a warren of passages into the depths of the ship. There, hidden behind a number of secure doors, they were shown a single dirty cell in which was chained a humanoid figure, clearly malnourished and mistreated. As their eyes adjusted to the gloom in the unlit prison, they recognised the figure as one of the treacherous Eldar, and Moullierre introduced it as her husband, before leaving them alone.

The Eldar captive listened as the explorers explained what they had seen on Zeesol, and he confirmed that they had destroyed one of his people's temples. He also told them that the Eldar knew a thing or two about death, and that it sounded like the door between life and death had been opened, which was allowing the dead to return from beyond, hence the current plague. However, he also informed them that we was no expert on such matters, although he could find such experts. The price he gave for such aid was, of course, his freedom.

PDF
Posted by thekelvingreen at 12:57