Aphesius and Mordecai stood above the bloody remnants of Telemachus Locke, the son and only heir of their Rogue Trader, but the guards they'd brought with them were busy subduing the cultists, and the cultists were busy being subdued, so no one else had yet discovered the cult leader's true identity. So they quickly hid the incriminating medallion, and turned a flamer on the corpse, proclaiming that such heretics should be burned, particularly as they'd not yet solved the problem of the rising dead. In order to deflect attention away from the cult leader, the priest ordered that the remaining cultists should also be executed, and with some reluctance, the guardsmen unleashed fiery death upon the restrained death cultists, most of whom accepted their demise in a state of religious ecstasy.

The cult leader's assistants were led away for interrogation, and through the application of violence (Mordecai) and weird psychic manipulation (Triptych) the team discovered that the cult was being led by someone they called the "boy king", and that he had come to them during that period when the Banshee was lost in the warp for two hundred days; the explorers wondered whether some malign daemonic influence may have infiltrated the ship during this time in the empyrean. They discovered more about the cult's beliefs, but could not pin them down as true heresy, as the cultists seemed to believe that they were worshipping the Emperor in his aspect as a being hovering on the border between life and death. At this point, Aphesius made an executive decision and declared the cult heretical, which just so happened to tie in nicely with his previous order to have them all burned to death.

There followed a sequence which touched my cynical GM's heart, as the players began conspiring against each other. This was a great bit of roleplaying, as the players were all aware of Telemachus' death, but only the characters of Mordecai and Aphesius knew, so they decided to keep the truth from their comrades. Aphesius went to Locke, spinning a tale the boy had not attended his spiritual lessons for a number of days, and the Rogue Trader tasked him with finding Telemachus, who'd undoubtedly just gone exploring in the lower decks again. Then the priest and the gunbunny began planning to arrange evidence to support their version of events.

During the night, Aphesius was woken by a knocking at his door, and answering, he found himself looking out on a vast plain of bleached white skulls stretching out as far as the eye could see 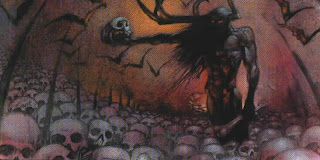 , with foreboding black storm clouds boiling in the sky ahead. He attempted to return to bed, but found that the door was now behind him, and locked. Not only that, but he turned to find himself facing eight red-robed figures, who all spoke with a single voice, acknowledging his killing of their champion, and offering the priest the chance to take his place. Aphesius was briefly tempted, but his faith returned to him, and he uttered a prayer to the God-Emperor, which seemed to break the illusion, and he found himself back in his cabin, drenched in sweat.

The next morning, the priest mentioned his dream to his companions, and Triptych's long study of the esoteric meant that he found some elements of the dream familiar, but he could not quite place them. In the meantime, Aphesius arranged for Telemachus' medallion to be "discovered" in a service duct, and we had some more good roleplaying, as Ben, playing an explorator with a fanatical desire to uncover hidden truths, decided to investigate further, and found that the only person to go anywhere near the duct in recent times was the acolyte Aphesius had sent to "discover" the medallion. Already suspicious of the preacher, Maximillius kept his discovery to himself for the moment.

The group approached Locke and revealed that they had discovered a death cult aboard the ship, that it was probably a front for worship of the Ruinous Powers, and that the cult had likely killed Telemachus, although no body had been found. They gave Locke his son's medallion, and left the noble to his thoughts, turning the Banshee towards Jameson's Hollow in order to answer the distress signal they had received previously.

Arriving in-system, their auger arrays picked up a small flock of vessels in orbit around the void station, including the Dark Filament, the ship of Rogue Trader Aurelie Moullierre, with whom they had an alliance. They also detected the Thunderhammer, the vessel of the military minded Telemon Maul, hanging back at the edge of the system, apparently without power. They got in touch with the Dark Filament, and were surprised to have the call answered by Kruger, the commander of Jameson's Hollow. He revealed that the station had been abandoned due to the swarms of living dead, and that the survivors were packed into the vessels in orbit; the priority was overcrowding and resources, and Kruger requested that the Banshee help to lighten the load a little. The explorers were reluctant to let a bunch of refugees on board, and asked to speak to Moullierre, who seemed pleased to see them. Remembering how well she and Locke got on, the explorers suggested that she come on board the Banshee, in the hopes that she might be able to cheer up the distraught Trader. They also asked about the Thunderhammer, and discovered that no one else had noticed its presence; the explorers were immediately suspicious, and decided to check out Maul's vessel for themselves.

They sent the Banshee to meet up with Moullierre, and took a shuttle full 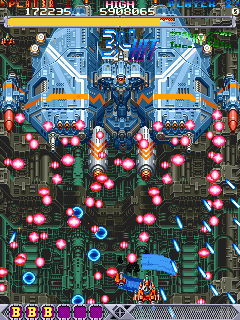 of troops out to the Thunderhammer. Inching closer, they detected that the ship was active, but seemed to be on silent running, waiting for something. As they approached even closer, the cruiser's array of weapons came to life, and Triptych found himself having to weave the shuttle through a hell of plasma lances and explosive ordnance, a hair-raising few minutes, if the mutant navigator had hair of course. The shuttle docked with the vast ex-naval vessel at a point which Maximillius guessed was close to the command bridge. They found the corridors of the ship quiet and empty, and advanced carefully, getting to the bridge without challenge, that is until they opened the blast doors. Inside, milling about without apparent purpose, was a throng of walking corpses, all clad in flak armour, and wielding automatic weapons and monoknives, a shock to the explorers, who had expected to see more of the feral dead they'd encountered elsewhere. Slumped in the golden command throne at the centre of the bridge was an unmoving figure clad in the flak armour of an Imperial military officer, but the explorers had little time to pick out further details as the horde of dead surged to the attack.

The explorers and their soldiers opened fire, but a mêlée soon ensued, with the slashing and stabbing of monoknives met with close range pistol blasts and the bone-cracking thud of rifle butts. In all this, Sol and Mordecai attempted to pick off the figure in the command throne, but the mass of ornamentation and technology provided cover, and they could only score glancing hits. As the combat escalated, the figure rose from the throne with a painful slowness, smoke rising from the few hits which had been scored, and looked at each of the explorers, before turning to the sensechal. Raising its arm, the figure pointed its power maul at Sol and bowed its head, a gesture the seneschal recognised as a formal combat challenge. Then the figure began wading through the mêlée towards Octavius Sol.