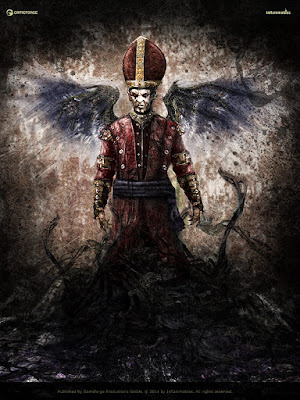 We return to our regular schedule after a two week break.
How did we survive two weeks without roleplaying is anyone's guess.

Apparently, Blades in the Dark went through some rule changes in our absence but I don't think we'll start using them just yet.

Our last job left us in possession of a significant amount of drugs and as such, our first order of business was to figure out what to do with them. Brainstorming away, we decided to not only add flour to it but to sell them as fishcakes! Of course, with hardly any cooking skills of our own, we had to turn to the recruitment of new staff in order to make use of the recent market demand caused by the previous supplier going down under... literally. We managed to find a nice old lady with an extensive CV which included such things as drug distribution and brothel management, and cooking! She was hired on the spot.

Second order of business was to set up a distribution centre. We had some problems coming up with good ideas until we realised that the nearby Church of the Forgotten Gods is in dire need of new management. It does help that the building was very nice. Our Slide went to work giving out free samples and making the local congregation realise the current management wasn't good enough for their worship and that under our management, things would change for the better! We would even introduce scantily clad waitresses to serve fishcakes during sermons!

With the congregation looking forward to the upcoming change of management, all that was left to do was to make the change. We attended an evening service and while the Slide took care of the congregation outside the church, Mercer took the main priest to the side and explained the situation to him. Sadly, he didn't agree with our views and as such, we had to turn to Plan B.

Oddly enough, a candle just happened to fall rather loudly to the ground, giving Mercer the appropriate opportunity to stab the priest in the gut... and that's when we realised he was, in fast, a demon... hiding his massive horns underneath a cloak.

In the ensuing fight we once again had an opportunity to make use of the flashback mechanic present in the system when GM Jack asked me if the bullet I shot at the demon was silver. Remembering that the Lurk had a spare downtime asset roll hanging about, I asked him if he might have procured one in the morning. Turns out that yes, he did, and he even lend it to me because he didn't own a gun himself and I was clearly interested in the ballistics of a different type of ammunition being used... but then the dice decided that no, silver doesn't actually work against demons!

Resorting to bladed weapons, it took us a while to hack the demon into pieces. It was a very stressful fight, stressful enough that I was the first to obtain a point of Trauma... a few more and my character will suffer a mental breakdown, bringing him out of the game, it seems.

On the upside, turns out demon pieces are worth a lot of coins so at the end of the evening, we managed to extend our crew's territory, created a source of income and earned a significant amount of coin and prestige.

Not many crews can boast murdering a demon...