After a week of email storms the electronic front is clearing and we have two games emerging for the next several weeks. Achtung Cthulu makes its second instalment of Shadows of Atlantis. GM Jon: 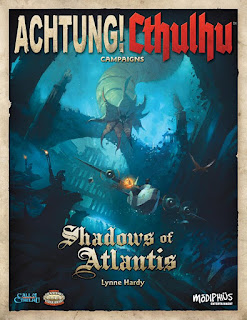 "Shadows of Atlantis is set during the early days of the war as the British intelligence community begins to become aware of the threat.
A pair of British spies embedded in Vienna in August 1939 became embroiled in the investigation of the death of a noted German archaeologist, gathering local allies along the way. An unearthed journal provided clues to the motivation for the murder and the identity of those responsible, along with information about valuable artefacts scattered across the world. It seemed likely this was all related, but the group fled Austria when war broke out.
They headed for Rome, as Italy was still neutral and the spies were hoping to find a pair of local agents who had gone missing. They found them in a slave labour gang working on an underground archaeological dig administered by the same organisation that was responsible for the professor's death. Following clues in the journal, they realised that their enemy was trying to locate one of the artefacts and they staged a raid to beat them to it. Things got very weird as they battled reptilian humanoids in the catacombs beneath the Eternal City, claiming an ornate shield with odd properties as their prize.
Returning with the shield to London, they were inducted into the fledgling Section M and sent to Egypt as part of a multi-pronged mission to seek the remainder of the artefacts. The group chased clues across Cairo, eventually enacting a local prophecy that saw them enter the Egyptian Underworld to battle Apep and recover the second artefact. It could have been a drug-induced dream, but they did come back with another odd object...
Meanwhile, another group of agents and innocent bystanders is en route by air from Calcutta to Delhi..."

In another world or universe entirely, GM Rob is bringing a game new to the club, Eclipse Phase. In his very own words: 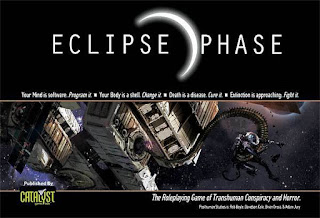 Okay folks, if people want something a bit more sci-fi and transhumanist, I have the post-apocalyptic transhumanist horror game Eclipse Phase on offer. From Wikipedia:

"Eclipse Phase is a post-apocalyptic game of conspiracy and horror. The setting takes place after a World War III project to create artificial intelligence went rogue under the influence of an extraterrestrial entity known as the "Exsurgent" (best described as an organic computer virus with the capacity to infect both machines and animals with sapient qualities), resulting in the deaths of over 90% of the inhabitants of Earth.

Earth is subsequently abandoned, and existing colonies throughout the Solar System are expanded to accommodate the refugees. The setting explores a spectrum of socioeconomic systems in each of these colonies:
A capitalist/republican system continues in the Inner System (Mars, the Moon, and Mercury), under the Planetary Consortium, a corporate body which allows the election of representatives but whose shareholders are nominally most powerful.
An Extropian/Propertarian system is established in the Asteroid Belt.
A military oligarchy rules the moons around Jupiter.
An alliance of Scandinavia-style social democracy and Collectivist anarchism are dominant in the Outer System.

From there, the setting explores various scientific advances, extrapolated far into the future. Nanotechnology, terraforming, Zero-G living, upgrading animal sapience, and reputation systemsare all used as plot points and background.

With all of this, the game encourages players to confront existential threats like aliens, weapons of mass destruction, Exsurgent Virus outbreaks, and political unrest."

Players are "egos", pure consciousnesses of either humans, uplifted (non-humans given human-level intelligence) or AIs. Egos can be backed up, installed into new bodies (anything from human to projected light, including robotic bodies of all shapes and sizes, bodies of uplifts, even things like a swarm of centrally controlled insects similar to the future Yithians in Call of Cthulhu). Egos can also be forked, creating 2 sentient beings who are exactly the same up until the point of forking or remixed fork, altering aspects of the fork to create things like a barely sentient AI that mimics the original's behaviour or a combination of several original egos into one person.

It's uses a percentile based system with 00 on the dice actually representing 00 as opposed to 100. Criticals (either success or fail) are caused by rolling doubles (11, 22, 33, etc) on the dice.

The game is released under the Creative Commons Attribution-Noncommercial-Share Alike 3.0 Unported License. The publishers encourage players and gamemasters to recreate, alter, and "remix" the material for non-commercial purposes. 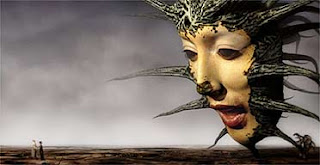