The Peril of 1st level 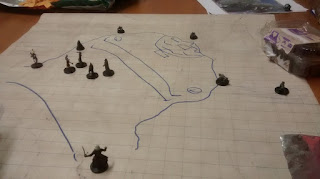 Here is a quick before an after picture, I could ask you to spot the difference but being smug at a funeral is generally considered inappropriate. I exaggerate only slightly as despite the fact that our Scout did a fantastic job of creeping up on a skeleton, he did immediately throw away his sword as a rather botched attempt at a stealth attach. Fate decided not to be speared in the back on this particular occasion. Taken below a zero level of hit points, our brave player, Nick, attempted to roll his three attempts at staying alive and, sadly, failed two of them putting his character into immediate probate - a situation every thief, I mean scout, would wish to avoid for professional as well as personal reasons. 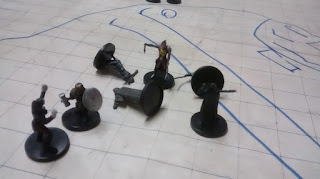 It was fortunate, in all senses of the word, that apparently as a Halfling he did in fact get another stab at life as the 'lucky' rule came into play for his race for which a tense but successful roll was made and  by the skin of his teeth  has now a story to tell.
As it happens, he wasn't the only one. Attacked by skeleton archers, reanimated corpses and slippery ghouls the Paladin, Ranger and Cleric were also treated to a near death experience and it was briefly the Mage vs everything before reinforcements arrived. Not for us as such but after the loot, still, beggars cant be choosers.
It was all a very close shave but there were the obvious things we could have done differently. It all goes to remind me really that even when starting new players or even those new to roleplay in general, 1st level characters are actually a big challenge - not only is there the inherent lack of experience and hitpoints as characters but more often or not it is the first time a player may come across the do's and dont's of basic survival - a rule of thumb will serve you well provided it isn't cut off.
So endeth the first session of this part of the DnD, bruised, battered and barely breathing but hopefully a little wiser.
We'll see.... 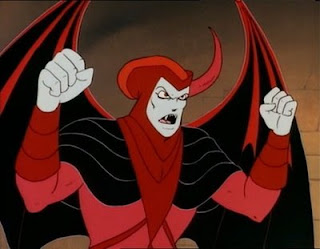