It just an opinion and correct me if I am wrong but there is a time for fast food and there is a time for dealing with Unknown malevolent entities that are manifesting and murdering innocent people. This can create quite a conflict of interest it seems for our Save Envoys as last week saw the party split up in earnest.

Its certainly a way of covering more ground, usually with the characters entrails, and rarely a wise choice when hunting monsters. It seems that the Chill party of six  multitasked within a whisker of at least one life. Three envoys went to the morgue, two envoys went to check out an apartment and one envoy went to get Pizza. As it was late at night, the morgue was not open for business so they just hung around for a bit chatting about dead things and disturbing passers by. The Pizza parlor turned out to be quite a challenge what with the American's passion for fast food, there were dozens of choices for toppings, square pizza, round pizza, garlic dip or indeed barbecue and added to all of this is whether fries or chicken wings are most appropriate,. This was a challenging assignment but handled professionally I thought. 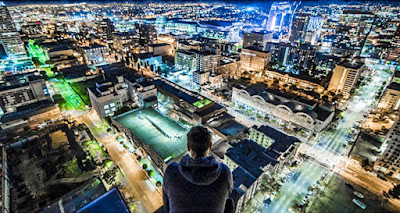 The remaining pair of envoys went to investigate a suspect's penthouse apartment just a few blocks away from the suspicious death they were investigating. Rather than flash their NSA badges around, which seems to be happening rather too much,  they elected to go up to the roof and drop down onto a patio Assassins Creed style. Whist both envoys went up to the top of the building, it seems that one had a change of heart at the last minute and went for an emergency pizza just after dropping the other one off to face whatever was inside.

Cut a long story short, the only effective Envoy was very nearly overwhelmed by an entity stepping out of a mirror that had the subsequent ability to split its form in two. It was important to encourage confidence in the player as at some point the entity was firmly wrestled to the ground before another copy of itself rose from its own body - offered the fight or flight options, the envoy wisely retreated. Given that we had a couple of new players, and that the brave individual concerned was somewhat dropped in it by his colleagues, I was uncomfortably generous with them. Fair warning, this will not be happening again.