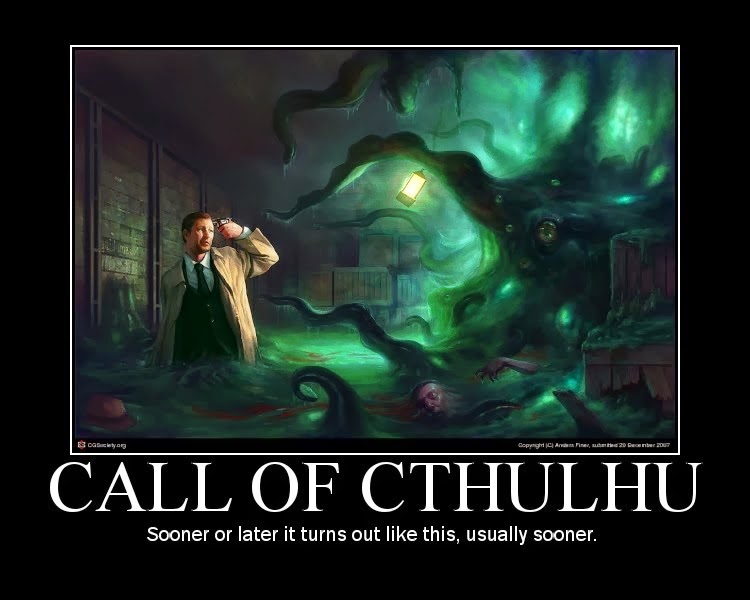 Ah, the old ones are the best. Not a Cthulhu reference but last week in the 13th Age we tried to take the p*** a bit and deliberately split the party in the search for various plot leads just to see what would happen. Quite rightly GMJack suitably chastised us and when I say chastised I mean flayed us within a inch of our lives. Poor little Tiefling, She had, for reasons that escape me (though reason seems like the only party member that is capable of escaping anything at the moment),  wandered down an alley and got herself mugged by 17 people. Now GMJack is making a point here I feel as its not often than 17 muggers crawl out of the brickwork - I mean there has to be an economic issue with regard to cost effectiveness of splitting loot 17 ways let alone the general HR paperwork and CPD. To be fair it would appear that the majority of them were on an apprentice or job sharing scheme as they only had 5 hit points each but even still we barely got there in enough time to save our little schizophrenic diabolist.

For anyone who has not come across it here is the jingle:

"After the brief and fatal (for the scout / investigator) diversion in some Goblin caves the party left with a rescued captive leaving the goblin tribe severly reduced in numbers but happily with a new leader (though Godlin politics being what it is might not be for long). The party head to their destination of Phandalin, a frontiers town built on the ruins of a previous settlement built hundreds of years before (mainly for humans, dwarves and halflings).
That evening after meeting up with their contacts and gaining a bit of well earned gold the party explored the town meeting the people. It would seem most from to the West side of town are friendly sort whilst those on the east side of town near the haunted manor are brigands, ruffians and downright hooligans. It would seem the town has a gang problem.
There were various conversations with townsfolk - the local priestess, the townsmaster plus a few farmers but the main focus was the gand on the east side of town. The druid wanted to test out her new ability of changing into another form and promptly went for a mastiff where she tried to get into the inn at the east side of town (a local gang haunt) . In managing to run into the Inn she tried to ingratiate herself with the members. She did manage but suddenly realised that the gang members needed another animal for their 'pit fights'.
Pick up and dumped in front of three cages holding rats. Luckily the rats were normal rats and the druid mastiff made quick work of them. After that she had to swiftly leave as her transformative powers were running out.
So we left it with the druid, now disguised as a cat, having left the inn was making her way towards the haunted manor alone whilst the rest of the group were contemplating a search for a druid, tracking down a tribe (well 15) of orcs with a potential side trip of a banshee visit or dealing with this gang that may be behind he disappearance of a man and his family "
PS Welcome to Paul who joined us last week, hope to see you again.
PPS and massive street cred to Dave for bringing a Birthday cake for GMJack last week. Cake should be made compulsory when roleplaying.