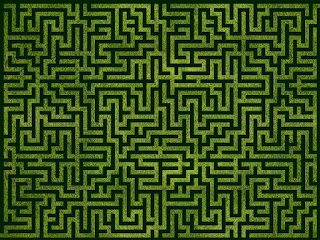 So it appears, or rather it transpires that we have appeared, within an ancient underground complex of some description, not Dwarven though by the look of it. The archaic teleportation pads that we are using could have delivered us anywhere but more to the point it looks like this end of the transport system has been neglected for some decades; where the stone plinth isn't worn with age it is covered over with moss and fungus. Problem for us is that it is voice activated and keyed to a specific word. It has occurred to us on the other side of the jump that the word may of course be from a ancient or dead language and a pertinent occasion to make sure that the languages section of our character sheets hasn't been neglected as is so often the case. Either way we have no way back at present. 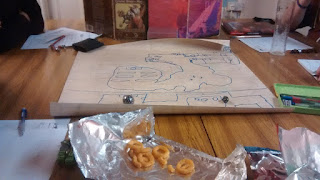 There being no backwards, forwards was the only option available so we mapped out what we could of an underground complex, somewhat  unstable in structure and emanating a faint evil glow. I was grateful to have de-sanctified an alter with my axe and got an appropriate level of book burning in but we are still lost in a maze full of rooms, traps and secret exits. On the plus side we did get through a physical room full of animated statues that intervened to bar our way but between our addled brains and a Tiefling that we picked up, we shuffled through unscathed.
Lastly we managed to get past a mystery room full of dangerous portal doors to various unholy and ghastly locations, really by trial and error and also by some hit point loss.
Where are we now ? Don't know, I hope we have a avoided a lock in, but I have a feeling I now know who is behind all of this...

As for the FengShui currently running, I hear that they have completed one of the chapters of their adventures by slaying a cyber gorilla. Not sure what that is but I am imagining something like a KingKonginator.