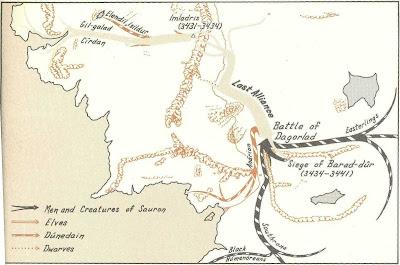 Field Log- Cpt Aranor 25th March 3436 Orodruin
The great eye bears down upon our Alliance beyond the Great Gates but as we set forth we know He now has nowhere left to go. We will see it done.
Field Log- Cpt Aranor 4th April 3436 Barad-Dur
Last four days in deployment after a long march. Whilst the men already carry the scars or Orodruin they bear steadfast determination to see the day out. The Siege of Barad-Dur will begin. All units are in position and we expect for our part to assault the Southern Tower at sunrise.
Field Log- Cpt Aranor 10th April 3436 Barad-Dur
Heavy and prolonged fighting. This will be no short order. We have been denied all week but at the cost of the Enemies defences. Orc ranks are thin and the gate shall not stand another week, we are sure of it.
Field Log- Cpt Aranor 17th April 3436 Barad-Dur
Heavy losses and full retreat. I have never before witnessed such a thing. Our banners marched forward through the shattered gates, no quarter was spared and the walls ran black. Broken Orcs lay in our wake and victory was at hand. But the bodies did not lay. As our first blow fell upon the doors of the second tower the very dead awoke about us. All rank and file arose and pressed upon us with a fell savagery. We lost half our force in retreat and even our own slain turned upon us. What can we do against such evil?
Field Log- Cpt Aranor 18th April 3436 Barad-Dur
The men did not sleep and their spirits are spent against the nightmares. Force of Arms cannot bear against such an army. I have dispatched to Alliance command. We need the Dwarves and their siege engines. We will not underestimate Him again.
Field Log- Cpt Aranor 3rd April 3438 Barad-Dur
For a year gone the southern walls have withstood the dread rain of Dwarven missile but no longer. Now is our time.
Field Log- Cpt Aranor 8th April 3438 Barad-Dur
Rubble now lies all about where once stood the first tower. No movement. In and about what remains we have come across a keep of manuscripts, a library of devilry and fell craft. Put to the flame we have destroyed the foul pit for all except a Tome that resists unscorched by way of our purge.
Field Log- Cpt Aranor 12th April 3438 Barad-Dur
Its writing shifts and its secrets it withholds. It brings me dark thoughts and vile knowledge. I cannot sleep and have ordered it secured from the field. It is a weapon wrought not for men and will not serve our means.