Given that last week GM Jack was on holiday, our Gary brought in his copy of Talisman. Now it seems that when you ask a lot of role players about Talisman, you often get a distant look in their eyes and the response, '...I remember Talisman', like trying to recall where you left your car keys in 1985. 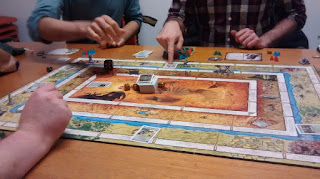 Its an odd one as tho there have been several versions it just seems to evoke exactly the same heartwarming experience as an old Mr Kipling Apple Pie advert; the board looks to me like it's never changed.

The game comprises several character classes with Strength (attack), craft (magic points) and life (life) tho with a varying alignment. The board comprises 3 realms to negotiate to achieve the Crown of Command in the center of the action. What I really like are the massive stack of items, followers and enemies which become trophies if you kill them. It generates a huge space of possible circumstances for a player and also, as the game goes on, more resources are gained and more stats can be raised - a sort of levelling up. Notwithstanding of course that one can also lose what one gains and if characters land on the same square they do have the option to attack each other.

There are shady and welcoming places on the map which appeal to various character demeanors and also just generally dangerous caves, crags and graveyards where monsters can lurk. Once an adversary is exposed in a place it will stay there until slain and its body claimed as a trophy, so the realm slowly populates with creatures and items as the game progresses. 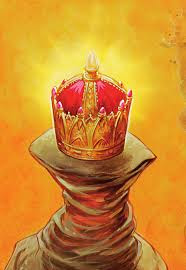 For our session, Gary's character got killed off quite quickly so he went from a Dwarf fighter to an Assassin. My humble Monk made steady progress but whet up to a more dangerous realm before he was ready and died off (though he was weak mainly thanks to Fade attacking me with his Ghoul on several occasions). The Ghoul in question just generally fared badly as Ghouls do but it was Nick's Priestess that was the actual winner who made it as far as the third realm with all his finesse and heavily upgraded character. Though I would credit Fade as the spiritual winner playing his Ghoul in fantastic style just wandering to and from the graveyard - occasionally into the Chapel where he would burn in the light but did so anyway just to scare the nuns. When he wasn't in his graveyard, freaking out the clergy or biting other players he was being ignored in the village.

All told after a couple of hours hilarity it really felt like we had an adventure rather than a game but despite the occasional snakes and ladders issues of getting knocked back randomly it was wonderful to play it again. I daresay I'll pick it up again in another 30 years.