Savage Eberron III: The Secret of the Forgotten Vault (Part 2 of 2)

Part one is here.

The party dipped into the savings of Stone Investigations, plc in order to buy lightning rail tickets for everyone, and made the journey in about four days; they spent the rest of the week drinking and gambling and ordering vast quantities of room service comestibles while staying in a fancy Krona Peak hotel, before dragging themselves, bleary-eyed, to the meet. There they encountered a nervous young dwarf who took them back to what seemed like an abandoned clockmaker's shop down a quiet side street.

The dwarf had not heard of any Vault 13, but suspected that the Jhorash'tar might know and arranged for the party to meet with the orcs the next day.

He took them up into the mountains, a difficult journey which ended with everyone getting a fatigue point — it was only a minor dent in their abilities, but for some reason they took it quite seriously — and found themselves surrounded by a group of orc archers. The orcs claimed that they had not destroyed Vault 13 and that in fact it still stood, and they agreed to take the party to the vault's general location, although they made it clear that they didn't trust the party enough to take them to the vault itself. On the other hand, they did give the characters a set of skis each, in case they needed to make a quick getaway. The foreshadowing was so heavy at this point, you could call them Chekov's skis. 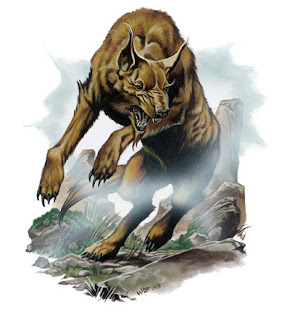 Arriving at the vault, the party found a vast sealed stone door and a small guard hut built into the mountainside. Tossing stealth and subtlety over the edge and into the valley far below, they assaulted the hut and slaughtered the old dwarf and his blink dogs within, before moving on to the vault itself. It was of course sealed by magic, and the group remembered from the Kundarak tour that such doors could be opened only either by a dragonmarked member of House Kundarak, or a blood relative of the vault lessee; they weren't sure of the latter, and their best guess — young Jenna — was back in Sharn, so after some experimentation, they dragged the dead dwarf guard over to the door, pressed his cold dead hand against the door, and were relieved to see it open.

Beyond were stone steps heading down at a steep angle into the darkness. Jon the bard decided to ski down, only just catching himself before the stairs ended at the edge of what seemed like a bottomless void. The rest arrived — on foot and much later — to find a large stone cube suspended in the blackness, held there by some kind of magic, and in its side another door. Galaxy flew over on his glidewing Trixie and inspected the door, discovering some sliding brass panels inscribed with circles, and another panel showing the panels in a certain arrangement. This was my attempt to challenge the players not the characters, by throwing an old-school logic puzzle at them, and it worked quite well with them huddling together to throw ideas around.

After a couple of attempts they solved the puzzle and the door opened to reveal an inky, unnatural blackness.

This turned out to be a magical effect similar to a portable hole, and on the other side was the true vault, filled with sealed crates. Trixie ferried the party over one by one, and Stones and Jon detected a faint magical aura in the vault, theorising it to be some sort of stasis field. The team opened a random sample of the crates, discovering many fine works of art, all of which were either of Jenna, or included her alongside the last king of united Galifar, Jarot ir'Wynarn.

The team decided that these pictures were evidence for their theory that Jenna was indeed an unknown scion of the ir'Wynarn royal family, and furthermore, given the lack of other children in the images, and the few dates they could find, that Jenna was the oldest of Jarot's children. There followed a long and fascinating discussion between the player-characters as they decided what to do with this new evidence, and while there was no consensus on their long-term plan, they did at least agree to take some of the art with them. The team then made the long climb out of the vault, ready to return home.

Which is when I threw the ski chase at them.

They climbed out into the sunshine with Galaxy taking to the air to see if their delve had been detected, and saw a large group of dwarves armed with crossbows and snowboarding down the mountainside towards them. Galaxy remained on watch, the rest strapped on their skis and they all made a break for it.

I ran this as a chase, and it worked quite well, although it took a little time to adjust to the more abstract positioning involved in the chase rules. I threw in some obstacles and about three rounds in, some of the team heard the tell-tale rumbling of an avalanche, something they'd feared from the moment they first climbed into the mountains. Except that Galaxy, from the air, saw the tumbling wave of snow swerve around obstacles, and then they all knew I wasn't going to settle for a boring old avalanche. 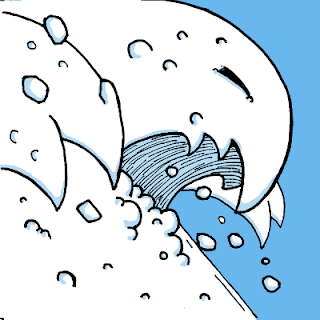 So the second half of the chase involved the remaining crossbowmen, a group of increasingly battered and bruised player-characters and a dwarf wizard riding atop an AVALANCHE ELEMENTAL. Asap the half-orc did a runner and skied off into the distance just before the avalanche made its appearance, so Seb had to decide whether to remain safe or return to help his friends; he chose the latter and got bashed about by the elemental, thus revealing the character's weak spot, as Seb had put the majority of his points into offensive capabilities and a high Toughness, but struggled for a number of turns to remove a single Shaken condition due to his poor Spirit. Stones and Jon engaged in a magical duel with the wizard, while Fibulon attempted to pick him off with his crossbow and Galaxy — the only member of the team able to reach the magician — dove into mêlée with him.

In the ensuing battle, Galaxy feared he might lose another mount, and Jon took some heavy wounds; every Benny at the table was spent but the player-characters managed to get the better of the dwarves right at the end, and as the avalanche elemental disintegrated around them, the party made their escape.

Like the climactic battle in the previous adventure this fight had an epic feel, but it was much less of a grind than the tussle with the manticore. Part of this, I think, was because the team had a clear goal — to escape — and so their tactics were more focussed, and the chase structure worked well to add tension and excitement; the chase rules are going to be changed for the upcoming Savage Worlds Deluxe Edition, but I have no complaints about the existing set. After the manticore encounter my players said while they enjoyed it, they felt a bit powerless towards the end, but this time they all seemed to enjoy the big battle, and the adventure as a whole; I also had great fun, and any misgivings I had going into the second session were long forgotten by the end.