Savage Eberron IV: The Caverns of the Kobold King

The session began with the players getting into a debate about what to do with the young Jenna ir'Wynarn; the half-ogre bard Jon Loger and human duellist Fibulon wanted to press on with their plan to form an underground organisation around Jenna's claim to the throne of united Galifar, while Galaxy Jones was undecided and the dwarf artificer Stones McGuffin wanted nothing to do with any of it and just wanted to go looking for adventure. As it turned out, adventure found them.

Edie Stone -- occasional player-character and their employer -- told them that she'd been contacted by Morina Wood, a Sharn resident whose father was missing. The team headed off to speak to Wood, finding her in a somewhat disreputable tavern, engaged in a drinking competition that she seemed to win with ease. Any suggestion that I lifted this scene straight from a classic adventure film would be completely unfounded, obviously. 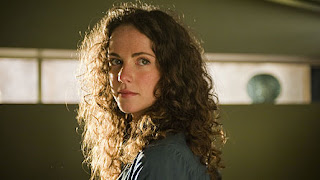 Morina Wood explained that he and her father Roderick were archaeologists and that they often went on expeditions abroad to explore ancient ruins and bring back artefacts so that modern society could better understand its past; it was on his most recent trip, into the monster-ruled nation of Droaam, that the elder Wood made his last contact. His plan was to cross the border between the coast and the southern edge of the Greywall Mountains, and Morina was to travel later by the more traditional -- and safer -- route and meet him in Greywall itself; Morina arrived to discover that her father had indeed crossed the border, but was lost somewhere in the southern part of Droaam. She offered the player-characters three thousand gold pieces if they could bring back news of Roderick's fate.

They accepted and spent a day or so looking for clues and following leads in Sharn, running into the fixer Fennifee, who appeared to be a vampire but was revealed -- after some cajoling and threats of violence -- to be a poser. They discovered that the Woods were less into academia and more into grave robbing for cash, and also found out more about Roderick's expedition; he'd taken a group of mercenaries with him as protection, and Fennifee was also able to provide a fairly detailed plan of the expedition's route.

The team felt that they had exhausted their leads in Sharn, and hired horses and a cart for the journey into Droaam. Just before the border they were stopped by a group of Breland soldiers who inspected their paperwork, and it seemed as if there was going to be a fight -- players being players -- but the episode passed without violence, although the soldiers suggested that the team either turn back or take a safer route into Droaam.

Moving on, they crossed the border and picked up Roderick's trail, which was later crossed by another large group of tracks. The second set seemed to be newer and to be heading off to the north, while Roderick's carried on into the west, suggesting that the two groups had not met; still, there was some brief discussion over whether to follow the new trail, and Galaxy Jones took flight on his glidewing Trixie to see if he could get a better view of things from the air. He saw that the second group were still quite close and seemed to be made up of around twenty to thirty gnolls, marching at great speed northward. The team were aware that gnolls made up a large part of the military of Droaam, and so decided to stay out of their business and carry on following the Wood expedition. 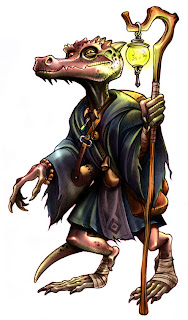 They soon came across evidence of a camp, and so decided to rest for the night in the same spot. During the night they were assaulted by small robed figures wielding daggers, and despite the hard-of-hearing McGuffin's inability to wake up, the team captured or despatched their assailants. The would-be-assassins turned out to be kobolds and were no opportunistic bandits, as they claimed that they had been sent to do away with the player-characters. The team also learned that Roderick and his party had also been ambushed further along the trail, and had been taken back to the kobold lair to be fed to "the Big Big Boss"; some of the more paranoid members of the group wondered if the Big Big Boss might be a dragon, but their captive assured them that he had no wings, which didn't seem to make them feel any better.

The players did not treat their captive well, and this was one of the stranger parts of the session for me, as they were quite happy to torture the poor thing to the point of death, heal him with magic, then do it all over again. Perhaps it was fatigue, or blowing off steam at the end of a long week, but it all seemed a bit unnecessary to me. Since we're using Savage Worlds and not D&D proper, there's no alignment -- not that I'd use alignment even if I were running D&D, but that's a subject for another day -- and Eberron as a setting was designed to be far less tied to that moral framework, but even so this whole sequence struck me as a bit off and I found it quite uncomfortable. 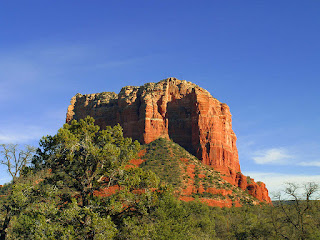 The team managed to glean the location of the kobold lair from their captive and began to plan their assault. A quick flyover from Galaxy Jones revealed that the lair was a cave complex within a butte and that there were entrances both at ground level and on the top; despite the presence of a couple of guard stations, and the inherent difficulty of reaching the summit of the butte unseen when only when party member had the power of flight, they decided to attack from the air.

They approached with relative stealth but once again it seemed as if they were expected, and although the kobold guards retreated, the team's path into the complex was blocked by an enormous red kobold they took to be the Big Big Boss; a brief taxonomical discussion followed as the players pondered whether a really big kobold wasn't just a dragonborn, but then he started hitting them with his flaming meteor hammer and that soon stopped all talk of science.

The Big Big Boss was big -- obviously -- and strong, and also had some magical abilities, throwing up a ring of fire around the edge of the battlefield and reflecting the energy from one of Stones' inventions right back at the artificer, but even so he did not last long against a combined assault by the players. Jonark's mind-affecting magic is quite potent against even the strongest creatures and did much to soften the target for the others, aside from poor old Stones McGuffin who spent most of the fight trying to catch up with the others after a misunderstanding between myself and Stones' player regarding relative distances. Though I loathe battlemaps, I need to find a middle ground so that such confusion doesn't arise again.

As was inevitable, the Big Big Boss fell but laughed at the player-characters as they struck the final blow, something which didn't seem to faze them one bit, although this laissez faire attitude would catch up with them later. They explored the inside of the butte -- no sniggering at the back -- discovering a beaten and malnourished minotaur chained up in one cave, and a midden in another; after some discussion, they healed and freed the minotaur, and digging through the kobold refuse the party found what was left of Roderick Wood and his soldiers.

Considering their job done, the player-characters fled the cave complex and headed back to Sharn. Upon arrival, and wanting a bath and a meal even more than that three thousand gold, they discovered that their home base had been razed to the ground and that Edie and Jenna had disappeared.

PDF
Posted by thekelvingreen at 12:57