There was a brief reminiscence, at least for me, last week during a brief discussion of the RPG Paranoia. 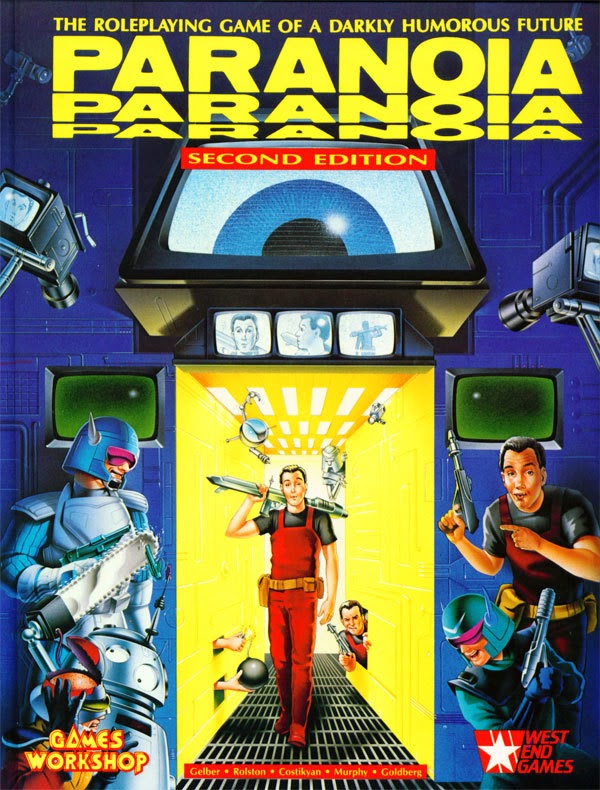 I remember the first time I played. It was a one off game and no one was any wiser regarding this game than any other, although the GM was behaving in a bit of an odd way. Our mission was simply to guard a tank bot and ensure that it was protected from communists for the duration of our shift. Simple enough, a job for the boys.
However the penny started to drop when the bot decided it was very bored and began various self tests culminating in its deploying several dozen sheepish proximity mines that wandered around aimlessly by themselves.
Having spent 20 minutes just trying to stay alive, it became apparent that this was simply not a plausible strategy. After the first grenade went off in someone's pocket, replacement clones were rushed into the scenario like chicken wings at lunchtime. It was immense fun and I'm happy to say we learnt absolutely nothing.
Here are a few comments from club comms for anyone curious about the game.
All comments are treasonous and have been emailed to Central Computer.
Remember: happiness is mandatory.

Never run it but I've played it, it's an old classic by West End Games. I think Mongoose are still doing Paranoia since WEG vanished but WEG had a few great games under its belt.
It's good for short adventures and one-offs and its slapstick comedy is good for more laid-back sessions.
Rob.
----
being a mutant always appeals, though in my case it's hardly 'roleplay'.:)
Chris
----
With the right GM, it's a lot of fun.
(I have very clear memories of having to stand in a briefing room because the seats were the wrong colour and making use of a dog vendor near the escalators - "dogs must be carried").
Jon
----
Yes, I have been reading about it and sounds fun. Anyway, it's a suggestion. The good thing is it does not have to last for many sessions.
Read about someone who got a bowl of M&M's to the table and zapped anyone who ate one above their colour clearance.
Pedro
----
Its genius. Excellent for a one session filler.
Think 1984 crossed with the marx brothers.
Grenades with a throw distance of 20 feet and an explosion radius of 50 feet.
All hail central computer!
Adrian
----
I have been reading Paranoia supplements for years and always wanted to play!
The latest edition of the game I have (Paranoia XP), offers three different modes of play, ranging from the notorious "zap" style where everyone dies before they even get to the briefing room, through to the more longterm "straight" mode which is supposed to play more like Orwell's 1984 than Looney Toons; so it is possible to find the right balance for different players.
Steve
----