I would not expect a roleplaying game, nor session, to be an educational pursuit. Especially considering that when I received my first roleplaying game in the mail (Vampire: the Masquerade Revised), my dad informed me it's an acceptable alternative to being addicted to drugs. I've since assumed that's what most would think about this hobby we partake in.

However, during our recent session, as we were being described the scuttling noises made by some bots infiltrating our station, we learned that they were not, in fact, attempting to sink us. Moreover, as we progressed from Bill and Prince Marik showcasing their Thesaurus-like skills in finding synonyms for the word, we engaged in banter over what beings may scuttle, why elephants wouldn't and the effects of low gravity on a creature's ability to scuttle.

While a highly enjoyable conversation, we still had the problem of our corrupted former selves planning to murder us... or so we assumed. There was only one thing we could do, we split the party! Bill's tiny octopus changed colour, and thus camouflaged, counter-infiltrated the vessel docked to our station. While he was going about the ship, avoiding traps and our originals, and gathering intel, the rest of the group did a similar thing. 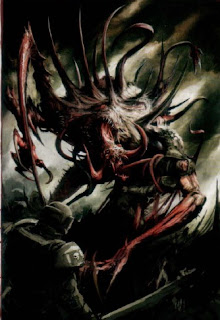 As GM Jon's Achtung Cthulhu! game did not have enough players, we were joined by Jack who took on the role of Bill's muse. She hacked into the system, a risky move considering we were warned the whole system was compromised, and found out we were dealing with a Basilisk Hack which could infect through audio (and possibly visual) contact. This put a major dent in our plans to jury rig a devive to send a warning. We had very little time to figure something else out because something was at the door to the chamber we were in. Whatever it was, it was cutting and slashing into it so a fight was inevitable. Armed and ready, we opened the door only to find my own mutated character!

It was described as a mutated person with horrific disfigurments all over its body. All this Corruption made us instantly think of Warhammer 40k so we had to roll against being confused by tropes! No? Just me? Well, I did fine on my roll... despite shamelessly looking through my character sheet on a Windows Phone.

Suffice to say, we killed it. Although in true horror-esque fashion, bits of it fell off, scuttled away and hardened on the walls and floor. Then, our octopus infiltrator came back, told us of how the other more dangerous versions of us were destroying the ship's AI and then everything went momentarily dark...


Said octopus's other body went limp.
It seems the muse inhabiting it had the excellent idea of beaming itself out of the station and harm's way...