I may have failed to mention that you can legally download a pdf copy of Eclipse Phase, so there's no reason for you not to peruse the game.

With that out of the way, let's return to our attempts at survival in space!

Remember those strange noises we heard as last session came to an end?
It turns out it wasn't anything serious. We only found out after taking a quick trip to the fusion reactor chamber, fixing another opened airlock and going back through the greenhouse (centre of the station) and trying to get into our AI's, Hans, server room. The scurrying sound was caused by some of the worker bots watching us. Eventually, they attacked but not being specifically built to fight, they were quickly destroyed.

Just before the fight broke out, we noticed the very same ship we remembered planning on exploring coming ever so closer to our station. We were unable to reach Hans but we did get his logs and as we looked through them, an ominous message was being received. We decided to risk it, put together a crude two-way receiving device and turn on communication.

On the other side of the transmission... were us!
Finally some existential angst occurred. Were they really us after the backup? Which of our groups is compromised? How can we live with ourselves now? What's the optimal temperature of tea?! With all these questions in mind, one thing was clear!
As much as our original copies tried to sound shocked and sincere, we could sense something sinister in the background... and as they called us (or themselves) on our (their?) empty threats of blowing their (our?!) ship up, they docked.

Moments later, they cut through the barricades we had set up. We felt the air pressure of two atmospheres equalise, as a putrid stench filled the station. Many bots came out crawling to scout out the surroundings... and then, something came out... 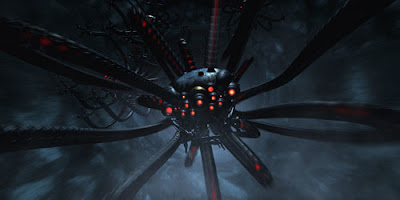