Fight On! is a magazine for fans of "old school" Dungeons and Dragons, presenting articles, house rules and full scenarios; there's even some campaign setting stuff in there, including a mega-dungeon presented one level per issue. 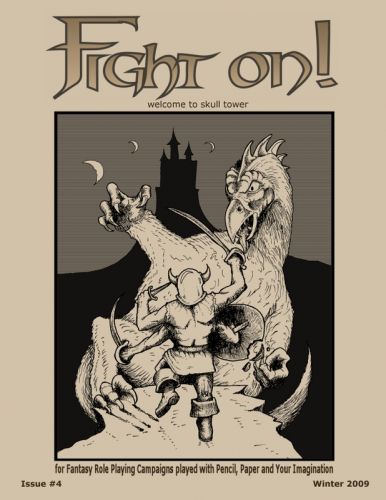 There's a particular focus on Original D&D, but there are enough similarities between the various versions of the game that the contents of the magazine are useful for any edition up to 3rd, and even that's probably workable. And of course, the contents are fully compatible with newer retro-cones such as Labyrinth Lord and Swords & Wizardry.

Anyway, it's a solid magazine that's improved with every issue, and to me it feels a little bit like White Dwarf before that publication turned into a miniatures catalogue; Fight On! has that same sense of enthusiasm and creativity that made WD such fun. Like the older magazine, not every article is a winner, but there's so much content that the individual GM is bound to find something of use in its expansive 100 pages.

In the interests of full disclosure, I should mention that I have some art printed in this issue, but I'd recommend it even if I were not involved, and I've got no input into the first three issues, which are also well worth a look. You can buy it (and previous issues) in print form here, and a pdf edition will be released soon.

PDF
Posted by thekelvingreen at 12:43 2 comments