It's been a bit quiet around here of late, not because of a lack of interest in gaming -- we've played a bit of Call of Cthulhu, playtested D&D5 and have even returned to Pathfinder in the past couple of weeks -- but rather because I've been preoccupied with working on Horror Among Thieves. The adventure exists in a playable form as of right now, and I managed to get in a playtest with my regular group, but there's still a lot of work to be done to get it into something that can be published.

That said, I thought I'd share a bit of a preview. This is one of the least spoiler-laden locations in the scenario, the House on Willow Lane: 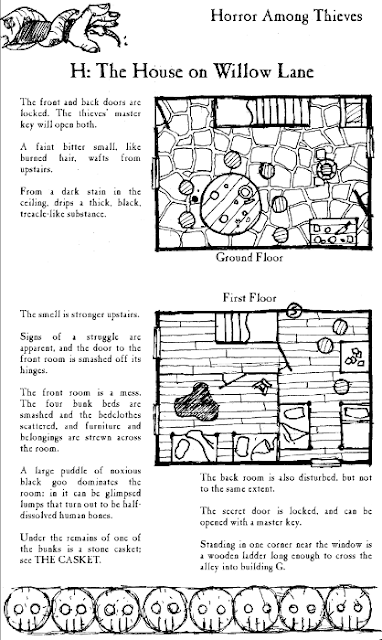 This is a rough version of how I want the book to look; if the adventure hadn't reached its funding goal and I'd put it out myself this is how it would look more or less, but with James Raggi's layout people putting it together it should look much better, and of course there are still changes to be made. Even so, this should give you an idea of what I'm going for.

PDF
Posted by thekelvingreen at 00:08 14 comments