The Hills Are Alive

It's been a bit of a funny time of late for our gaming group, as one regular member has had to relocate to the other end of the country, and another spent a few weeks touring South America, so we've not been able to put together a regular roleplaying campaign. That might be a bit of a blessing in disguise though, as it's allowed us to try out some other games we might have overlooked if we were in full campaign mode. 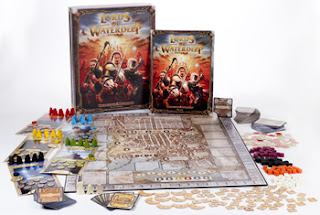 We've played a few games of the new Wizards of the Coast board game Lords of Waterdeep. I was a bit hesitant at first as I'd played a couple of the recent Dungeons & Dragons board games and while they're fun enough -- sort of light versions of D&D4, concentrating on the good bits of that game and cutting out all the dodgy stuff -- they're not that engaging. I also find it difficult to work up any enthusiasm for a product associated with the Forgotten Realms, surely the most dull of the classic -- I use the term with reluctance -- D&D settings.

It turns out that while Lords of Waterdeep is published under the D&D brand, it's quite a different kettle of ixitxachitls in terms of gameplay. I'm not a big enough enthusiast of board games to be able to identify its lineage, but it reminds me of a fantasy-themed Monopoly coupled with the mission structure of the old -- and brilliant -- Shadowrun collectable card game. The combination is quite a lot of fun and I would be more than happy to play it again, even with the bland Realms trappings. At least Elminster or Drizzle haven't turned up in our games yet.

We also played a bit of Kingdom Builder, a game which is fast and fun to play, but the English translation of the original German rules is so poor that we found ourselves better off using the French translation. It strikes me as a bit limited in scope, but it's a good way to while away an hour or so with friends.

The past couple of Fridays have seen us return to roleplaying with a couple of games of James Raggi's Lamentations of the Flame Princess, with me as the GM. I've never been a big D&D enthusiast, and I did not react well to our abortive D&D4 campaign. I'm happier with Pathfinder, but I did not enjoy running it; my preferred level of complexity is somewhere around the BECMI level, and LotFP sits right about there, making a few tweaks to some of the wonky mechanics that have always put me off running the otherwise similarly simple Labyrinth lord. 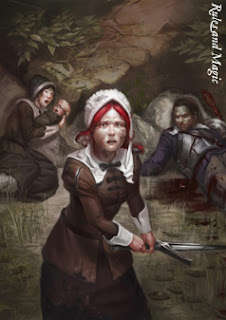 I ran the included adventure last week and we enjoyed it enough to play again last night. I have developed a bit of a -- mostly unfair -- reputation in our group for a certain type of adventure, and without revealing too much for those who haven't played "A Stranger Storm", I rolled my eyes when I read through and got to the climax of the scenario. Of course, my players all thought I'd written the thing myself when they got to the end, and I'm still not sure they believed me when I told them I was running it as written.

Last night's adventure was written by my own hand, although "written" is perhaps too strong a word. I had an adventure hook in my mind and a couple of hand-drawn maps, and that's it; I've not often gone into a game with so little prepared in advance, but I found it worked well, and the light nature of the LotFP rules made that easier. I was again accused of being up to my old tricks as the player-characters butted heads with what they assume to be inbred hill-dwelling cannibals, and I can't really put up much of a defence in this case.

Again, everyone seemed to enjoy the game, although the slow character advancement was a shock to a group more used to Pathfinder; that said, most of their earned experience has been from killing monsters so far, as they've shown an extraordinary aptitude for overlooking loot. We finished the evening with the party deep inside an abandoned silver mine, surrounded by the corpses of hill people and with an ominous moaning coming from further on down the tunnel; I don't know if this cliffhanger will be resolved, as we may well be playing Stuart's conversion of The Shamutanti Hills next week, and I'm looking forward to treading those old paths once again.

PDF
Posted by thekelvingreen at 13:43 3 comments