Three Things I Have Learned From D&D Fourth Edition

I pretty much bypassed Dungeons & Dragons during my gaming "upbringing". My original group played a bit of everything, but mostly Shadowrun and Call of Cthulhu. We did have a brief go at AD&D2, running through the first book of Night Below, and we played a couple of sessions using the "Black Box" basic D&D set, and it was this version of the venerable game which caught my attention more than any other, although we never played it again after that. 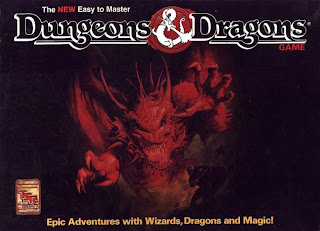 My current group plays the fourth edition of D&D quite a lot, and while I enjoy it well enough, I do find myself longing for a simpler, more pure version of the game, and I keep thinking back to that black box. Of course, it is unavailable now, except through eBay and the like, but there is Labyrinth Lord, which is more or less the same thing (albeit based on a slightly earlier version), and completely free too. I've talked about the game before, but that was more of a discussion about mechanics, and today, I'm more interested in the more philosophical side of things, specifically how my experiences of the newest edition of D&D would now affect my appreciation and play of an older version. So here are three random musings of that nature.

1: Interesting Locations are Important
Fourth edition emphasises combat environment right from the outset, with player-character abilities often involving moving opponents from square to square, or making use of different kinds of area effect and so on. This isn't hardwired into the rules of older editions in the same kind of way, and as such, I think it can be easy to assume that it can't be done, and to thus overlook the importance of the shape, size and nature of the battlefield. So if I ran or played LL now, I would take time to created unique settings like this, and even though there are no pushing or pulling powers in the rules, they are a light enough framework that nothing breaks if a players wants to, say, forego damaging an opponent to instead push them down a hole.

2: Different Monster Roles are Important
This is related to the first point, as the older editions of the game gave, in most cases, a single block of statistics for each type of opponent. There would be one type of orc (AC: 6 HD: 1 Damage: 1d6), and that again makes it easy to just fill dungeon rooms with identical versions of that orc. Fourth edition makes a big effort (too much perhaps, forgoing the elegant third edition concept of the template in favour of a completely new stablock for each type of each monster) of showing how that same group of orcs can instead be made up of front-line bruisers, nimble archers and lightly-armoured skirmishers, and it is a good reminder that there is no reason at all why this cannot be imported back into an older version of the game.

3: Different Mechanics are Important
This is the biggest epiphany for me. For the longest time, I did not like the percentage-based thief skills of older editions, or the way finding secret doors varied based on class, and so on. As such, the universal mechanic approach of third and fourth editions appealed to the neat freak in me. Then I had a conversation with another gamer about how fourth edition perhaps goes too far in this other direction, and almost flattens the class differences out; what I came to realise was that although the specific mechanic will vary between a fourth edition At-Will fighter power and a fourth edition At-Will wizard power, they're both At-Will powers, and they both have the same kind of effect on the opponent. In an older edition, the fighter rolls a d20 to do what she does (hit an opponent, mainly), the wizard usually doesn't roll at all to use his abilities, but has a learning/resting sub-game built into the class, and the thief gets to bust out a whole different set of dice to use her skills; I had previously seen this as untidy, but now I understand it to have a positive effect on the game, because it emphasises the different roles and abilities of the classes at a more emergent level than raw rules mechanics. In other words, these are opportunities for the player themselves to do something unique at the table, rather than have the class differences be relevant only in the imagined space of the game.

None of these are rule changes as such, although the first two do lead to a bit of tinkering with what is already there, and I think that, for me, they would enrich the playing of something like Labyrinth Lord, capturing what I like about fourth edition and combining it with a ruleset which is much more to my tastes.

PDF
Posted by thekelvingreen at 13:35 7 comments