My group found itself between regular games last night, and I've been itching to run a game after only playing for months, so we decided to try out something new, and I dusted off the copy of Fantasy Flight Games' Rogue Trader I'd picked up back in October. 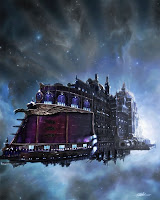 It's a space trading rpg based on the Warhammer 40,000 universe, with a ruleset derived from one of my old favourites, Warhammer Fantasy Roleplay. I've played, but never run said ruleset, so I was a bit wary, particularly as the rulebook is a bit of a mess, full of vague writing, contradictory rules, and an unwritten assumption that the reader is familiar with the contents of an errata produced for FFG's previous rpg, Dark Heresy; there are whole sections of the book which make little sense unless used in conjunction with that errata, which strikes me as an odd approach. I decided to persevere however, as I've always liked the space trading genre, but found Traveller to be a bit stuffy, so the heavy metal excesses of the 40K setting appealed much more.

The players' experience of the setting ranged from complete unfamiliarity, through a broad dislike, to some vague memories of playing the wargame a decade or so ago, so I knocked together some basic fluff on the setting and sent it out via email before the game. They all got the hang of things pretty quickly once they figured out that it was essentially a game of lords and vassals... IN SPACE! I thank the group's experience with Pendragon for this, as the two games differ in the details, but are more or less about the same thing.

We started off with designing the players' starship, the Banshee, although as I recall, this is a shortened version of the ship's real name, which runs to something like fifteen words. The rules for this are a bit dry, reading much like an accounting exercise (although much less so than the Traveller equivalent), but the players all seemed to have a lot of fun with it, and spent about an hour and a half tweaking the Banshee to perfection. Then we headed into the game proper, as the team and their (NPC) Rogue Trader ventured into a new and uncharted area of space looking for opportunities for wealth and fame.

A local space station commander invited them to a feast thrown in their honour, at which they met the local representatives of the church and the Imperial Inquisition, picked up some rumours about other Traders and lost starmaps, and managed to foil an assassination attempt on their Trader, all before dessert. They followed this by interrogating the assassin, and the on-paper-socially-inept techie character got right to the heart of the matter with some inspired guesswork from his player, getting the name of the assassin's employer almost immediately. I would have run this as an extended series of skill tests, but Ben cut through everything with his direct questions, and there seemed little point to follow through with the mechanics; roleplaying beats dice-rolling! Not quite satisfied, the team's priest charmed the Inquisitor they met at the feast and convinced him to question the suspect; when the team saw what was left after the "questioning", the navigator freaked out, and the priest only managed to stay calm by reciting a litany to the God-Emperor. 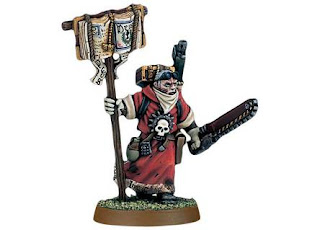 Seeing enemies around every corner and in every shadow, the players retreated to the Banshee, and the next day returned to the space station in search of the rumoured starmaps, the acquisition of which would make the exploration of this new area of space much easier. They discovered a long-abandoned navigator temple, containing ancient technology which turned out to be some kind of navigation database, and began work on transferring it to their ship in secret. They were briefly interrupted by the strange mutated guardian of the temple, a chaotic combat intensified by some failed fear and insanity tests, as well as getting used to the way Rogue Trader handles initiative and combat rounds. Despite the fiddly bits, the combat went quite quickly, and the monster was torn to pieces by a critical chainsword swipe from the priest, without causing much damage at all to the party; I had designed the encounter to be a little soft, as I didn't want anything too complex in the first session, nor did I want any player-character deaths so early on, but even so I think it was a bit too easy. After the fight, the players sneaked the database on to the Banshee; now with a complete map of the sector, and revenge and profit on their minds, they are deciding where to go next.

We finished late, and were quite tired by the end, but everyone seemed to have good fun with the game, and I was asked to run it again this coming weekend. I'm still not won over by the system, which seems unnecessarily complicated in places and clever and elegant in others; I kept thinking how much easier it would be to run the whole thing under Chaosium's Basic Roleplaying ruleset, but there are lots of bits of the game we haven't tried yet (starship combat for one), and I'm determined to give it a fair try. I'm sure the system's eccentricities will be less jarring given time.

It desperately needs an errata though.

PDF
Posted by thekelvingreen at 15:45