Hourglass of the Silver Sands: Session 3


Faced with obvious danger, the Lawgivers prepared themselves to fight. Mare drew her bow, ready to strike at the demon the moment it put on enough flesh to pierce through it while Whisper used the opportunity of everyone being distracted to step into the shadows. Confident in his ability not to be seen, he readied his swords and silently came closer to the demon. His skill in staying out of sight was so great that even Whisper himself didn't notice his own feet underneath him. When he tried to make the final step, he tripped over his own legs and fell down on the floor. The demon looked down on what lied next to its toes and tried crushing him with his pincers.

Spectre managed to pull the Hidden Sun out of harm's way before the pincer came down on his spine. It caught his arm but this did not seem to impede Shadow's ability to fight. Spectre quickly began to conjure a sword that could strike spirits in whatever form they would take while keeping an eye out for the other demons. As they were still dematerialised, he was the only one capable of seeing them and so he told his companions they have entered the ground floor.

Mara fired not one but three arrows in the span of time that it takes for a man to blink. Each carried a tiny spark of righteousness with it, enough to burn away the flesh of any unholy creature. As their battle raged, Isandlwana looked from the top of the building but saw no threats. There were two men firing at her but their precision was not worth her attention. Hearing Spectre's words, she bayonet to lever open the shutter of another window, jumped down onto the top of the swinging shutter, and swung into the room. Just in time to deliver the final blow with a blast from her firewand. 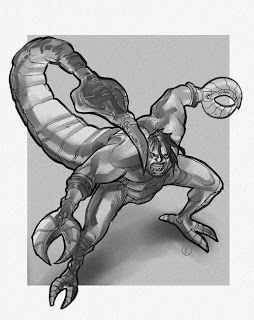 The demon vaporised, its body and soul gone. Yet Spectre informed told the other Solars that two more were rising up from beneath the floor. Although they couldn't see them, they were guided by the Twilight's insight and positioned themselves well enough to be ready when the demons took on a material form.

The room they were now in was brightly lit thanks to Mara's and Specter's anima blazing with the light of the Unconquered Sun. It was obviously much harder to conceal oneself when you're standing next to a Chosen of the Sun and perhaps this was why when Whisper struck with his blades from the shadow cast by a demon, the creature stepped forward and made the otherwise deadly wound shallow.

Not wanting to set fire to friend as well as foe, Isandlwana aimed at the demon not fighting Whisper. She recalled a story about a scorpion who stung itself to death after being caught in a circle of fire so she decided to test that theory. In the time a mortal gunslinger would shoot and reload his weapon, the Quicksilver Falcon had already shot four times, encircling her target in flames. It staggered, blazing but it didn't look like it would commit suicide any time soon.

Mara fired her arrows at the demon facing Whisper. Thanks to her extraordinary skills the arrows pierced through the demon's hide but not enough to go all the way through and hit the Night Caste standing behind it. The demon screamed in agony as the righteous fury of the Unconquered Sun burned it from within. Before it could succumb to its demise, Spectre chopped its head off with his newly conjured sword.

Outside, three more demons waited. Strangely enough, the townsfolk seemed to be on the side of the demons. The humans tried shooting at the Exalts who came too close to the windows. After noticing the Exalts stood their ground, two came forward to set the building ablaze. Whisper hurried to the ground floor and with a well placed thrust his blade went right through the wooden wall and into one of the assailants on the other side. The other one aimed his flamepiece at the resulted hole the moment the blade went back but the Dagger of Heaven was already gone.

Mara and Isandlwana fired at the demons from their positions on the first-floor while Spectre was shaping another spell. This time he summoned a bird composed wholly of flame. It flew through the window and up into the air. It quickly noticed its victim in the form of a demon in the middle of the street and flew down like a blazing comet on it. The demon jumped to the side, dodging a direct hit but even so, the bird exploded upon impact with the ground. Half the street was an inferno now. Some thugs were caught in the blast, as was the demon and the remaining arsonist. Even the sand itself was being consumed by the flames. Isandlwana made a quick look through the room and found a bottle of spirit that she then threw at a demon not caught by Spectre's spell. The bottle shattered somewhere on the ground.

The singed demon crushed through what remained of the front door. It found nothing on the first floor because Whisper has already made his exit out the back. He turned left and ran into a narrow alley. He saw some snipers on the rooftop so he jumped up and off the walls on both sides until he landed between them. Shocked by this sudden appearance, they both aimed their weapons at him and fired. Due to Whisper's body bending in impossible angles, they hit each other and were out of the picture without the Night Caste having to do anything.

The other three Exalts came down the stairs and got rid of the last remaining demon with their combined powers. Mara leapt through the air and caught the demon's tail with her fighting chain while Spectre and Isandlwana finished it off with their respective weapons. All they needed to do now is to interrogate the mayor while fending off frenzied attacks from half the population of the town.

This was a full on combat session. I never had this long a combat before. I'm quite glad I used a battle-mat for it because I sure wouldn't be able to keep track of what's going on otherwise. It doesn't help that my mind works on abstractions and I have difficulty imagining exact measurements so having squares as movement markers was a great boon and it made Athletics Charms that bit more useful.

I was very, very happy when the players realised that being Solars they don't have to worry about destroying everything in sight. They had to worry about keeping enough intact to have something to work with later on. Yes, all that carnage described above was caused by their attempts not to annihilate the surrounding region. Jon made sure that his spell wouldn't hit any more buildings... and I dare not mention the round square controversy we had! (oh wait, I just did!)

A little bit about the setting now. Exalted is a fairly standard fantasy setting when it comes to the level of commonly used technology. In the South, however, people do have access to guns (flamepiece) and riffles (firewand). The main difference is that these weapons don't fire bullets, they fire... well... fire.

The anima mentioned above is the result of an Exalted using their supernatural powers. The more they use them, the more they begin to shine with the light of their patron! In case of Solars, they become walking lightbulbs, filling the surrounding area with all the shades of the sun.