Living in a Box

Back in my youthful gaming days, I remember a collaborative game of Dungeoneer in which we'd take turns to GM the thing as the rest of the group wandered about a world map. Dungeoneer is a very broken game, but we had fun with the aimless format, perhaps because everything else we were playing at the time was quite plot-focused. 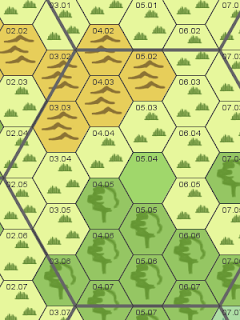 With the rise in interest in such sandbox gaming sweeping the gaming blogs over the past couple of years (which has even led to both Paizo and Wizards of the Coast releasing sandbox scenarios), I've been itching to have a go at such a freeform game again. I made an attempt to run something of the sort in Call of Cthulhu, but the players resisted it, with good reason I think, and so it didn't work out. Later, I had another go with Rogue Trader, and this was much more successful, as the game is much more suited to exploration and poking around at the corners of the map to see what's there.

That campaign's taking a break (oh, and such plans I have!), but I obviously did something right, as we moved straight into another sandbox game, this time using Paizo's Pathfinder rules. I think the plan may have been to use D&D4 at first, but we've had a good go with that ruleset, and I'm not sure it's to our tastes as a group; this suits me, as I was out of gaming for the entirety of D&D3's lifespan, so Pathfinder gives me a chance to see what the game is like.

I was a bit concerned, as I've seen and heard many horror stories about the pernicious crunchiness of D&D3, but we're about four sessions in, and it seems no more fiddly than D&D2 was, and is much less of a hassle to play than the overly tactical (to my mind) D&D4. It does strike me that something like Swords and Wizardry would be a more appropriate to a hex crawl game, but we've invested too much money and effort to switch now!

We're playing through the Kingmaker series of books (how Paizo's Adventure Path format translates to a freeform game, I don't know, so I'm keen to have a look at the books once we're done), and so far it's been great fun; we've got a proper old-school hex map, and we're wandering around the wilderness, investigating points of interest, fighting wandering monsters, and all that great retro goodness.

PDF
Posted by thekelvingreen at 13:13