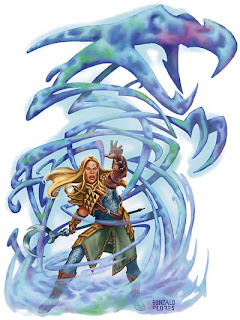 Following on from the first part, here's the second instalment of my rules for emulating Eberron's dragonmarks in Savage Worlds. This time, I'll be looking at the individual marks and their game effects.

I've followed the general advice given by the Savage Worlds core book and have tried to use existing rules rather than create new ones. As such, most of these abilities are covered in the Savage Worlds Explorer's Edition (SWEX); a smaller number come from the Fantasy Companion Explorer's Edition (FCEX) -- which I'd recommend to anyone running a fantasy game for the system -- and two are borrowed from the Hellfrost Player's Guide (HFPG).

Each mark has two abilities: one general Trait bonus that is always active, and a special spell-like ability that can be activated at least once per day.

...I must admit I failed to find an existing Savage Worlds equivalent to the original Mark of Finding, and I am reluctant to simply build one. If any Savage Worlds fans out there have a suggestion, do let me know in the comments.

(One might want to split the two powers between Houses Phiarlan and Thuranni, but it might be more interesting and organic to not do so.)

PDF
Posted by thekelvingreen at 13:30