Here's what I'd love to see propagate across the old school blogs: an example or two like the one I posted above about orcs. I love hearing how referees have made the raw materials D&D offers their own, especially if doing so draws on longstanding information or images associated with the game. The examples don't have to be long, unless you want them to be; all I ask is that they reveal a little bit of that do-it-yourself spirit I think is so representative of our corner of the hobby.

Now this isn't really an old-school blog, and I have an on-again-off-again relationship with D&D itself, so I'm probably not qualified to comment, but I do have one hat to throw into this ring.

I've never been happy with the traditional fantasy elf. They seem too easy somehow; they're fast, intelligent, better at magic than everyone else, and are usually immortal. It's Superman Syndrome, and like Superman, there's no edginess to them, nothing to grab and twist and make interesting; the closest you get is some ill-defined malaise, like the ennui which affects Tolkien's elves, the harmful decadence of Games Workshop's Eldar, or Moorcock's Melnibonéans -- though not elves per se -- which combine both. This is of course a sweeping statement, and I'm not nearly well-read enough to identify the exceptions, of which I'm sure there are many.

Even so, it's difficult to translate these social and psychological aspects into a game about kicking in doors and killing stuff, so my thoughts have tended to follow a different, more practical, path. Taking the forest-dwelling aspect as my starting point, I've expanded that along somewhat realistic lines, influenced in no small part by an old White Dwarf article -- in #69, by Peter Blanchard -- about how underwater societies would develop without access to metalworking (no fires, see) and other such markers of civilisation.

So my forest elves would be agile and stealthy, as comfortable in the canopy as they are on ground, somewhere between the alien in Predator and your average wuxia showoff. 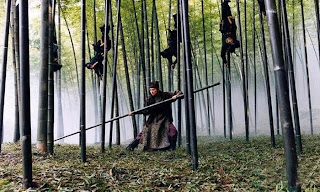 They probably wouldn't have metalworking, since mining seems out of character and you don't want to be setting up furnaces if you live surrounded by trees; so there's no elven steel, no mithril, or any of that extraneous bling. There might be the odd item that they've stolen or traded, but for the most part these elves are using sharpened stone, bone, the odd bamboo spear here and there, and probably their fists too, as unarmed combat seems a logical consequence of a dearth of proper weaponry. On a similar note, they'd probably be nomadic, as carving homes into the trunks of trees seems too destructive, and the typical Ewok village type treetop construction would be saved for the odd meeting place rather than each and every settlement. I want them to wander the forests and not be tied down, so that when outsiders come into the woods, the elves seem like ghosts, difficult to pin down and predict.

So essentially my elves would be barbarians -- with a touch of monk -- in D&D terms, one part archetypical jungle savage, one part Princess Mononoke. 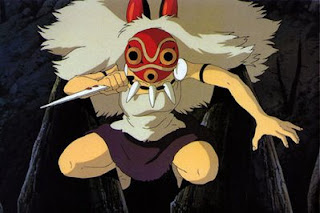 Despite their long lives, they'd have a society based around impermanence, with little in the way of metal and probably no paper, although they'd probably make use of standing stones and the like. They would be shamanistic and their magic would be based on illusion and druidery, with a fair smattering of earth-based spells in there. I'd also place more importance on their alliances with other forest dwellers, such as earth elementals, shambling mounds and even sentient animals, again like Princess Mononoke. Their utter rejection of the --literal -- building blocks of human society would make them seem more alien than the usual Immortal Skinny Bloke, and I'd consider giving them penalties when in urban situations, and perhaps full-on panic attacks when in a dungeon.

I'd keep the immunity to ghoul paralysis though, as I've always liked how strange and unexplained it is.

Oh, and no dark elves, sorry. The idea that you can tell the a "good" elf from an "evil" one just by looking at them appals me -- yes, even in a game about kicking in doors and killing stuff -- and I won't have it. You can tell my good elves from the evil ones by seeing whether they frighten off the loggers, or just skin them alive on the spot.

PDF
Posted by thekelvingreen at 11:23