Stuart at The Great Game likes to run a gaming day every so often during the half-term holidays; it's a canny way of keeping his kids entertained without him having to do all the heavy lifting, and he gets to get in some quality gaming at the same time. I tend to miss these days, as although I work in education I don't get the half-term break, but it happened to match up with a day off I already had booked, so the Stars Were Right.

The day began with a scenario from the Warhammer campaign Blood Bath at Orc's Drift, from back in the day when Warhammer had narrative campaigns, although we played it using the more modern The Lord of the Rings rules. I had no experience of these rules, as they were introduced long after I left the Games Workshop Hobby for more inexpensive pursuits, like polonium-210 trading, but the game was very easy to pick up and play and seemed to me to be a more streamlined and elegant version of the Warhammer ruleset, so I'm keen to play another episode of the campaign.

My side won the battle, slaughtering the elven garrison to a man, er, elf, aside from one pointy-eared coward who fled into the forests where my orcs could not follow. In fairness, Stuart's young son handled the opposing forces on his own, while I had both a larger force and a co-general -- although Ben surprised us all with the revelation that he'd never played a tabletop wargame in all his many years of gaming! -- and the scenario was weighted in our favour. 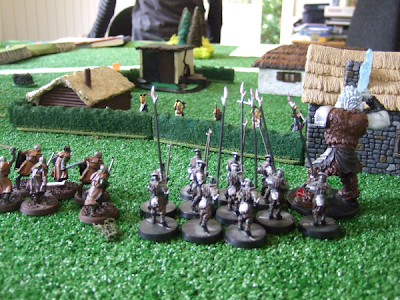 Oh, and we also had a giant.

After a lunch break, Stuart's son ran a bonkers freeform sandbox type of thing which -- despite using the Pathfinder rules -- felt much more old-school. We had a great deal of freedom, and the game seemed heavy on random tables and on-the-spot adjudications, all of which was a great deal of fun and felt very liberating. We did wonder later on whether it was worth using Pathfinder at all if we were going to ignore most of the rules, a subject with which I've struggled before, but the GM didn't seem to have any problem with it and ran a very fine game, so that's probably our answer.

While I enjoyed the Pathfinder game, the highlight for me was the Lord of the Warhammerings battle, which reminded me of how much I enjoyed playing tabletop wargames before I was priced out of the hobby. I'm half-tempted to buy a box of orcs, you know, just for old time's sake.

PDF
Posted by thekelvingreen at 09:58