Well, last night we played our second session of the Carrion Crown campaign adventure path and things seem to be slotting into place. During our time in the village of Ravengro -- and that is the silliest name for a village I've seen in a published scenario for a long time -- we uncovered evidence that an evil force was possessing villagers and making them commit acts of petty vandalism. Realising that we couldn't simply arrest everyone in town, it was decided that we should attempt to discover the source of the eerie occurrences, and hit the books for some Call of Cthulhu style Library Use; this is not what you might call a tale of high adventure. 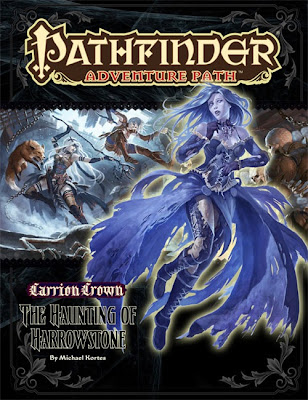 (That said, Stuart's cleric Veneticus got into an altercation with some village children who were singing a song the staunch moralist considered inappropriate. The little perishers took little notice of the ragged holy man's orders to stop messing about, and he skirted close to alignment change as he became frustrated and started lobbing stones at them. The rest of the party stepped in to calm him down, and all of a sudden my necromancer is no longer the most distrusted member of the party. Result!)

Later, we headed to nearby Arkham Asylum Harrowstone Prison to see if it was, as suspected, the source of all the odd goings-on. We cleared the ground floor with little resistance beyond some spiders and a couple of half-hearted ghosts -- although one spooked our paladin Sir Erudil enough to have him smash right through a heavy oak door in order to escape -- before running into the shade of the former warden's wife -- pictured -- who gave us a fetch quest; in order to defeat the ghosts of The Joker, the Riddler, et al the prison's most dangerous inmates, we would have to make use of items associated with them, items which were -- of course -- hidden throughout the ruined, haunted building.

New player Alex seems to be getting the hang of things a bit better now, but he was very quiet during the game and seems unsure of how role-playing games work; on more than one occasion he asked if it was okay to do simple things like search a room or open a door. I wonder if there's some sort of paralysis going on as Alex sees the somewhat crowded Pathfinder sheet and assumes his options are constrained by and limited to the numbers appearing there?

PDF
Posted by thekelvingreen at 19:40