The Dandy and the Madman

Stuart was unable to join us for last night's game, so the investigator party consisted of Ric's professor of literature, Manoj's artist and Ben's psychologist. They rattled through more of the clue-finding first phase of the campaign, before heading to Herefordshire to meet Alexander Roby, one of the key non-player-characters of the campaign. This is where we hit a problem.

The sequence in which the players meet Roby is pivotal, perhaps one of the most important scenes in the campaign, but it's also a closed scene. It's designed to give the players a lot of information about the campaign -- although it's almost all hidden behind layers of obfuscation so as not to give away everything -- but there's no room for expansion or further exploration; Roby says his piece and then shuts up. 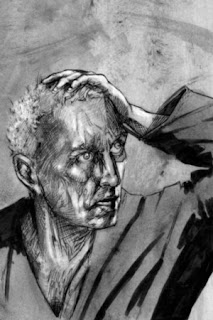 Any player worth their salt is going to try to get more out of the character, and that is exactly what my lot did, trying all sorts of methods to get the NPC to reveal more, but the fact is that there is nothing more for the character to reveal. I spent a good twenty minutes blocking every attempt to get more information and it felt like I was pixel-bitching; this is not at all my preferred GMing style, and I felt frustrated and unsatisfied by how it was played. I didn't want to break the fourth wall and simply tell them that there were no more clue tokens to pick up in that location, so I attempted to disguise that information in psychological terms for Ben's character; even so it felt like a fudge, but I'm not sure there's a better way to resolve the problem. I'm surprised that it's not something that came up in playtesting of the scenario, as further questioning seems like an obvious thing for players to do, and I don't blame them for trying.

I've mentioned before that the campaign as a whole tends towards the railroad, but most of the problems can be solved through sensible play; indeed, a good half of the initial phase of the campaign has been played out of the designed order, and I don't think the players have noticed. It's this one important scene that is more difficult to fix, perhaps because it's so important.

Also annoying was discovering that one of the key handouts -- the transcript of the meeting with Roby -- features a signature from a non-player-character who is not present in the scene! It's not the first error we've seen in the player materials, and probably won't be the last; the editing in this book is shocking in places.

By the end of the session, all three of the investigators had had a brush with insanity, and if that's not a measure of Call of Cthulhu success, I don't know what is! Next time, they're going rambling in the wilds of Suffolk on the trail of a cult worship site, without the relatively tough Hemingway to back them up in case  things get violent.

PDF
Posted by thekelvingreen at 13:52