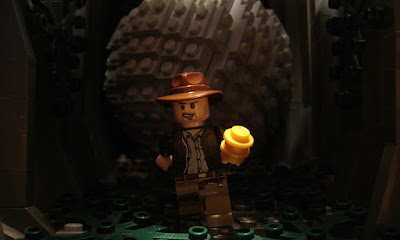 Its beauty is its simplicity and its real danger lies in its inevitably. I would suggest that if we were actually playing D&D I would roll to save vs clichés. Like moths drawn to a flame, the sort of flame that is very heavy and will turn you into A4 when it rolls over you, we are currently facing the classic boulder trap.
Its somewhat complicated by the fact that we have spent an entire day climbing a cliff via a thoroughly non health and safety compliant trail and deftly sidestepping oncoming issues does mean a plummet of 200 feet into a small pool. So what are our options? Well this particular theme park ride is in fact staffed by kobolds so we have decided to try and negotiate our way past the security guards and talk to the management directly. I cant even remember what pretext we used, partly as it was late but partly because I don't understand kobold but it is not going to go well. 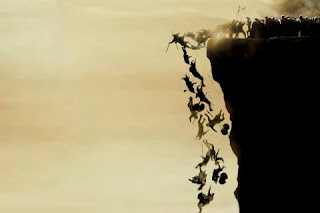 To be fair the boulder has the same problem we do to a degree as the path we are on does in fact have a couple of bends in it and as far as I know, large rocks don't steer particularly well and this option does appeal to my action hero character but we are in parle now I believe albeit briefly. Problem is that the little buggers have the high ground so the best we can do is keep them talking whilst we climb off the path, out of the boulder zone and onto the top of the cliff. Unfortunately no one has yet had a chance to count them as they are not wearing numbered uniforms so the odds are still being calculated. Still I am unsure as to whether triggering the trap and fighting uphill where numbers abreast are limited is a better outcome than fighting at full force against an unknown number of little assailants with our backs to a sheer drop. Any advice is welcome here.
It is worth mentioning that there is a waterfall coming out of the cliff which could in theory break a fall onto the pool below - depending on how deep it is. I guess we might find out... 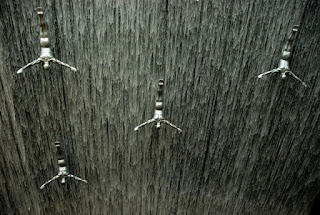