How to game on little energy

I am now ‘progressing’ into my mid-40s, and somehow, thanks to having tolerant g

amers in my gaming group, am still able to game!! Admittedly, folks have been very flexible to help me (and Stuart) out in this regard….. Insane amounts of work (I teach social sciences and thus have tons of marking, and an ever shifting teaching / knowledge domain) coupled with commuting 2 hours a day....

And also wanting to enjoy Brighton and go to the occasional gig, stay in touch with non-gaming friends, see a film, play some boardgames..….

How has the show been kept on the road (for me at least)?

Flexible & nice bunch of fellow gamers (and their wives) – who agreed (well - their wives did) to let me and Stuart shift the game to Friday so we are able to get more than 2 hours of gamage in an evening… and sometimes, somehow, from 7.30 to 12.30+...

Playing games which are more cathartic/ cinematic…. Like D&D / Pathfinder more and less heavy on the investigative games we all played when we had more energy (like Kelvin still does!!)….. (I do feel very guilty on Kelvin’s behalf – how he copes hanging around with a bunch of old fogies is beyond me. ;) If I am not jumping up and down, shouting and throwing dice I tend to fall asleep (yeah – like Father Jack – urg – is that me??!! Don’t answer that!)

Pathfinder too has helped…. I remember creating a pc for a 3.5 Eberron ‘campaign’ (it only lasted 2 sessions when the GM got distracted by Red Hand of Doom, and scrapped the campaign to run that, again for another 2 sessions or so, before quitting the DM’s shield!!)…. But to create a 3.5 edition D&D pc I was using 4 books: the Players Handbook, The Complete Adventurer’s Handbook, Eberron Core Rulebook, and Warriors of Might (I seem to remember) – Stuart used 5 since he was playing a Shifter, found in the Races of Eberron book…. MADNESS!! With Pathfinder, all you need (currently) are the Pathfinder RPG and - MAYBE the Advanced Players Guide……. And maybe the Bestiary if you are being a fussy b*gger and want to play a talking crow. ;) BUT for most folks, all you need is one book. PHEW!

Other things that help speed up play, and save on DM time: 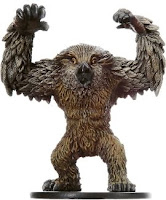 my metal ones. These can include ones from eBay – as in children’s toys – which you can get on the cheap. Stuart has just got some after the last insane session where our mage, Grameer (aka Manoj) summonsed about 4 rhinos to take down ‘Owlzilla’, a giant Owlbear in mail barding, along with the other creatures in the party which included a Griffon.

Play games for which there is plenty of online support. Pathfinder Adventure Paths offer this – in the form of free pdfs of the scenarios if you subscribe; forums with tips and resources from other GMs; software tools such as ‘Free PDF Image Extractor’ – freeware – which enables you to strip a map from a pdf down to its image without any text/ labelling so you can copy and paste it into word, blow it up into a bigger size and print it off to game on.

Healthy eating! Well - sometimes - but we try! Diabetic Fridays has calmed down a little!!