Yesterday Stuart posted some musings about wargaming, and it got me thinking about the fine art of pushing little tin lead white metal soldiers about a table.

As a teenager I did a fair bit of wargaming, although it was all of the Games Workshop variety, aside from one afternoon playing The War Machine mass combat rules from the D&D Rules Cyclopedia. 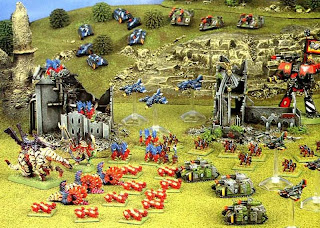 I have a poor head for tactics, one that borders on the comedic -- some of my opponents might say moronic -- so I was never much good at these games; I won my first game of Warhammer Fantasy Battle with a bold undead cavalry charge and thrashed a GW staff member at a display game of the then-new Epic 40,000, but aside from a long unbeaten run at Warhammer 40,000 -- because Genestealers were very, very broken in the first two editions -- that was the extent of my success as a general. Even so I still had great fun playing, before rising costs and rules changes -- in the case of 40K a combination of both, with the increase in the basic army size in the third edition -- pushed me out of the hobby.

Also, if I'm honest, I'm rubbish at the painting. I have a smidegeon of artistic talent, but I can't transfer that to the painting of figures to save my life. My neon pink Genestealer Cult is an embarrassment to this day.

So that's why I don't play these games any more, despite there being a sizeable community of tabletop wargamers here in Brighton. I'd love to play, but I can't afford an army and even if I could, it would look like a four-year-old painted it. A blind four-year-old. With no hands.

Even so, Stuart's post woke my long-dormant love of wargames, and so I did some poking around. Even after being out of the hobby for over a decade, 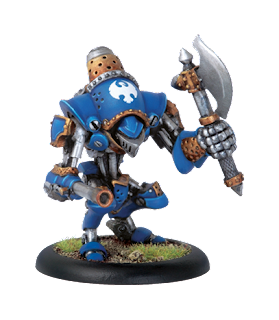 I knew enough to know that Warmachine is a popular alternative to the Nottingham hegemony, and I've seen some of the models in use in our various role-playing game campaigns, so I know that they're well designed bits of kit. The game is based around small warbands -- just like the Warhammers back in the day -- which might make the painting a bit less painful for me, and the game's emphasis on the mechanised warjacks with infantry as support reminded me of the Workshop's Space Marine, my favourite of all their wargames, despite being no more successful at it than anything else.

Then I saw the cost of the models, comparable to GW's pricing but for even less stuff, and that killed my interest in Warmachine. Maybe if I win the lottery. In the meantime, the world is spared my neon pink Cygnar warjacks.

So that was that, but then for some reason the Dreaded and Unmentionable D&D4 popped into my head, perhaps because it's often criticised as a wargame masquerading as an rpg. I don't think that's entirely fair, as it's more that the strong emphasis on the combat system makes it very easy to ignore everything else, but it did get me wondering about what could happen if one embraced that criticism and played D&D4 as a wargame.

The first step would be to create an interesting battlefield, with lots of environmental features to add some tactical flexibility to the game. Pits, areas of difficult terrain, things to climb on, and so on, nothing too unfamiliar to the average wargamer. After that's done, there seem to be two options:

I don't know how exciting it would be, or if D&D4's mechanics are too involved and complex for a wargame, but based on my experience of it, I don't see why it shouldn't work. This is more or less what the Dungeon Delves book does, after all, it's just less honest about it.

PDF
Posted by thekelvingreen at 13:06