Last night, we wrapped up the Pathfinder one-off we started last week, with the player-characters successful in rooting out the cult activities in Carrion Hill and defeating the eldritch abomination the cult had summoned.

As I mentioned before, I found the Pathfinder ruleset to be far less intimidating to run than I had anticipated, 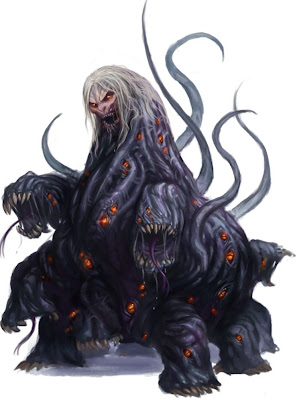 but even so I think it's too bitty -- in the sense that it has a lot of working parts -- for my liking, and if I were to run a D&D variant again in the future, I think it is likely to be something a bit more loose and interpretative like Swords & Wizardry or Labyrinth Lord. The move in D&D3 -- and thus Pathfinder -- to codify everything has I think led to a situation where exploitation of the rules has become more possible, rather than less; a good example of this is the idea of an optimum character build, something which is almost unknown in earlier editions. I don't begrudge the playing of the system in this way -- indeed my monk in Ben's game is an example, with his five attacks a round and his inability to be hit -- but I do wonder if the game as a whole is unbalanced in loading all this on the players' side. Much as I hate to admit it, but the Unmentionable Edition is perhaps more robust in this regard.

I'm sure it is possible to head off the exploits and level the playing field, but I suspect it takes a familiarity with the game that I am never likely to have, and that it would be easier to achieve in a simpler system. We shall see, as I have already been asked to run something under Swords & Wizardry.

I also wonder if these issues would have been as prevalent if the adventure had been better. I was quite impressed by Carrion Hill as I read through it, as it has a clever time-sensitive element as well as a neat modular structure reminiscent -- perhaps deliberately -- of the classic Masks of Nyarlathotep. The players are thrown into a situation, but can tackle the next sections in any order they please, which in turn can affect the climax of the scenario. The problems arose in the details, and these only became apparent in play.

The adventure suffers from a lot of glaring bottlenecks in the plotting. For example, the vital clue which lets the players know what to do next and unlocks that modular structure is written in Aklo, a language most characters are unlikely to have, and which is not even represented among the included pre-generated characters; the party got around this by having the cleric spam Comprehend Languages for a whole day, but that led to them falling afoul -- if only a little -- of the time limit. On a similar note, there are far too many sections where high skill values in Knowledge (Arcana) and Disable Device are required to progress, which can end the scenario right there and then unless the GM fudges things. The scenario more or less demands that a wizard and a rogue are in the party, but nowhere is this mentioned, and again the pre-generated characters don't measure up and are unlikely to hit the numbers required.

Furthermore, nonsensical situations abound and only exacerbate the bottlenecks. A building with an epic-level lock on the front door is bad enough, but for the same building to be made of thick stone, to have no windows and for the doors to be made of the same thick stone stretches credibility. Is this a fortress, perhaps? Or a gold depository? No, it's a brick factory. The whole adventure seems to be designed in this negative, passive-aggressive fashion, where everything is there to hinder the players, as if this were not a game, as the whole point of it was not for people to have fun. That said, some faults lean in the players' favour, such as the villain who occupies a room too small for the whole party to enter, which would be fine if he were a close-quarters fighter rather than a magician. Or the big final monster of the scenario, which is so big that by the rules as written it should not be able to get out of the first location, let alone get close enough to the player-characters to menace them at the climax.

I have bought two of Paizo's adventures. One was so awful that I knew it from a read through, but Carrion Hill surprised me. If I am to use their scenario materials again, it will be as a source of ideas rather than something to be run as is, as the convenience of a pre-written adventure is outweighed by the poor writing.

PDF
Posted by thekelvingreen at 14:53